‘Grandmothers and public health: unlocking the potential of older women in improving child, adolescent and maternal health’: a British Society for Population Studies-funded workshop held at LSHTM on 14 May 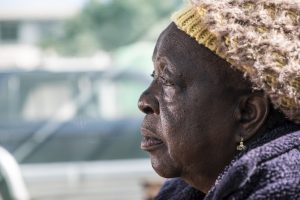 Dr Judi Aubel used the following exercise during her morning masterclass on ‘Grandmothers and public health’: she divided the room into two, and told half of us we were grandmothers, and the other half they were mothers of young children. She then turned her back on us grandmothers, and spoke only to the mothers, in the guise of a health worker providing advice on best practices for feeding children. ‘What message does that send to grandmothers?’ she asked us; ‘What message does that send to the mothers of young children?’

Judi Aubel is the Executive Director of The Grandmother Project: Change Through Culture, an NGO whose mission is to promote the health, well-being and rights of women,  children and adolescents in lower income contexts, through grandmother inclusive and intergenerational programmes. She gave the keynote lecture at the BSPS-funded workshop ‘Grandmothers and public health: unlocking the potential of older women in improving child, adolescent and maternal health’. Judi talked about her many years of experience working with projects aimed at bringing grandmothers into public health interventions. She talked about how important grandmothers are in providing advice and support to younger individuals about maternal health and pregnancy, child and adolescent health and wellbeing. Particularly in the non-western world, older women typically have considerable authority when it comes to such matters. Yet most public health interventions in countries in the Global South focusing on maternal and child health ignore grandmothers, and concentrate only on the mothers and children, the risk groups. Judi’s exercise above illustrated how this can hamper efforts to improve maternal and child health: it alienates important members of the community, and suggests to mothers that the wisdom and support of grandmothers isn’t necessary. 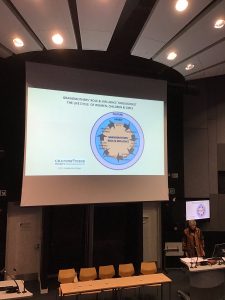 Judi also talked about how this situation may partly stem from negative views of older women from some public health professionals, who believe grandmothers give advice to mothers which isn’t always in the best interests of mother and child. But Judi clearly made the point that – whether you think grandmothers are a force for good or bad – they clearly are very influential as advisors in their families throughout the life cycle, and also occupy leadership roles in the community. For these several reasons Judi argues that grandmothers should be included rather than excluded from public health programs. Judi’s keynote was a call to use a ‘family systems approach to improving maternal, child and adolescent health, incorporating the whole family rather than focusing only on risk group members, e.g. pregnant women, or newborns.

Judi’s keynote ended the workshop; earlier in the afternoon the audience had heard about the importance of grandmothers from several disciplinary viewpoints. Co-organisers Anushé Hassan and Rebecca Sear opened the workshop by talking about work from one of the few research areas which has shown a great interest in grandmothers – the evolutionary social sciences. This interest initially stemmed from an evolutionary puzzle: menopause. Our species is almost unique in that women become unable to have any more children around half-way through their potential lifespan. A solution proposed to explain this puzzle is that menopause creates helpful grandmothers, who care for their existing children and grandchildren rather than risk further births. This hypothesis resulted in several studies showing that the presence of grandmothers does increase the survival chances of their grandchildren, as predicted. More recently, evolutionary social scientists have moved away from an interest in menopause – leaving a space for some fascinating, and similarly supportive, research on the handful of whale species who also go through menopause – to become more concerned with the influence of the extended family on health, wellbeing and fertility.

This research has been concerned with testing the hypothesis that reproduction is cooperative in our species – mothers need a lot of help to raise children with long dependency periods, and this help comes from the extended family, including grandmothers. Substantial evidence has now been produced that grandmothers, and other family members, do have significant impacts on grandchild health and on women’s fertility, though these influences do vary by context, and are occasionally even negative, rather than positive. Most research has been correlational, demonstrating associations between the presence of grandmothers and demographic and health outcomes. But Anushé presented some survey data she’s collected in Tanzania, asking questions about who provides care for children, showing clear evidence that grandmothers are important carers for children. Though in her sample, this care differed in interesting ways between town and village, suggesting modernisation may result in changes in caregiving practices, from paternal grandmothers to maternal, and perhaps to more care from non-kin. 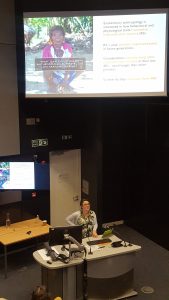 Later in the afternoon, anthropologist Dr Abigail Page, an MRC Research Fellow at LSHTM, spoke about her meticulous research on the Agta, a hunter-gatherer population in the Philippines, which also collected observational data on who cares for children. Her data showed that, though the majority of children did not receive grandmaternal care in this population (apparently due to unusually high female mortality rates and mobility), when care was received from grandmothers it was particularly intensive care, quite similar to that provided by mothers, such as washing and feeding children. Grandmothers were therefore able to reduce workload in Agta mothers, unlike fathers, who contributed in different ways to the family (in productive labour, and low intensity childcare, such as watching over them). 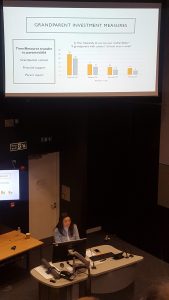 Dr Emily Emmott, also an evolutionary anthropologist, from UCL, shifted the focus to higher income contexts. She showed that grandmothering is still very prevalent even in the UK, where social norms tend to emphasise a nuclear family, intensive parenting model, with mother as the primary caregiver for children. For example, she showed results from a study which showed that grandmothers are an important source of advice around breastfeeding for UK women. Emily also pointed out that the consequences of grandmaternal input around pregnancy and childcare are not well studied in high income contexts, because policymakers tend to focus on the nuclear family. Basic research is clearly still needed in allowing us to understand better what roles grandmothers have in family life and how this impacts the health of other family members.

The message of all of the evolutionary researchers was that we really need to look ‘beyond the nuclear family’ when understanding the processes which lead to good health and wellbeing for both children and adults, in all contexts, as the isolated nuclear family is not the ‘traditional’ family form policymakers often assume it to be. 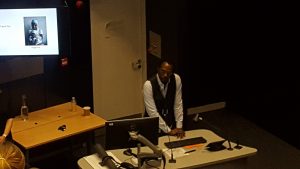 Returning to the workshop’s focus on public health interventions, Dr Dixon Chibanda, at LSHTM, gave a fascinating presentation on a rare and innovative, but phenomenally successful, example of including grandmothers in public health interventions. Dixon is a psychiatrist, working on interventions to improve mental health, and has developed ‘the Friendship Bench’: an intervention which involves older women providing support and advice to younger people in the community. Randomised controlled trials of this intervention have shown clear benefits on mental health. Dixon is based in Zimbabwe, where he developed the Friendship Bench, but this intervention is now being scaled up across sub-Saharan Africa: over 50,000 people have access such support in over 70 communities in the last year. The Friendship Bench has even just been rolled out in New York.

Thanks to the British Society for Population Studies for funding this workshop, to Frankie Liew, Alyce Raybauld, Judy Lieber and Sarah Myers for helping us with workshop arrangements, and to everyone who came along to the workshop and made the day such a success. The ‘Grandmothers and public health’ initiative will continue, as many attendees enthusiastically signed up to a Grandmother Network, which will promote and share research on grandmothers in public health, including on Twitter using the hashtag #GrandmotherNetwork.

Recordings of all talks are available at the links below:

14:30 Rebecca Sear & Anushé Hassan: “What do we know about the impact of grandmothers on health?”

14:45 Dixon Chibanda, LSHTM: “Grandmothers on the Friendship Bench: a source of wisdom”

15:30 Abigail Page, LSHTM: “Grandmothers and childcare in hunter-gatherer societies: the role of demography and mobility”

16:00 Emily Emmott, UCL: “Investigating the associations between grandmother support and parenting behaviours in the UK” 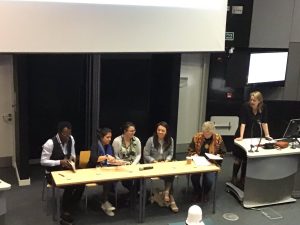