When we look back at the early days of the School, we think of the Lecturers, such as Robert Leiper, the Directors, such as H. B. Newham, Sir Andrew Balfour, and even our School’s founder, Sir Patrick Manson, however we rarely look at other members of staff, who were just as important in the running of the School. One such member of staff was Robert Mackay, laboratory assistant from 1899-1928. In Sir Philip Manson-Bahr’s 1956 memoir detailing the history of the School, he describes Mackay as someone who ‘possessed a superior intelligence and displayed an innate aptitude for laboratory work’ and ‘was intensely loyal and to him the School always came first’.

Robert Mackay was born in 1886 in East London, where his father was a dock labourer and an active supporter of the Seamen’s Hospital. When he was 14, Mackay was brought to the
School by the Hospital Parson, Rev. Henry Gilbert who had taken him into the Felstead Mission. Soon, Mackay showed his skills becoming an expert with the microtome and was apt at preparing the entrance of larval filariae into the proboscis of the mosquito for Dr Low. By 1902, Robert was working with Sir Patrick Manson when he found the organism in the first case of human trypanosomiasis in England. This was a significant feat as Sir Patrick Manson had been struggling to find it himself. Mackay was also brilliant at finding malaria crescents or other organisms where others had failed and invented a technique of his own for the demonstration of the flagellated body in malaria.

A well respected laboratory assistant Mackay was also highly regarded by staff and students of the School. Sir Philip Manson-Bahr writes that, ‘generations of students at the School remembered him, and on their return from abroad their first request. They were always anxious to hear his latest quips’. Mackay was seldom absent from the School, even during the First World War, and was present at the School during the Silvertown explosion in 1917. What makes Robert’s story more extraordinary was the fact he also suffered from a physical disability, as well as coming from an impoverish background, to become a respected member of the School.

Robert Mackay died on November the 9th 1928, when he was hit by lorry at the School’s site in Endsleigh Gardens. At the time of his death he had served the school for 29 years, aiding the research of predominant scientists after overcoming his own disadvantageous beginning. 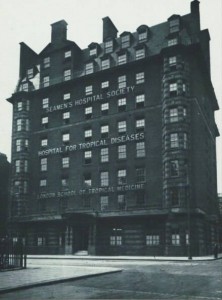