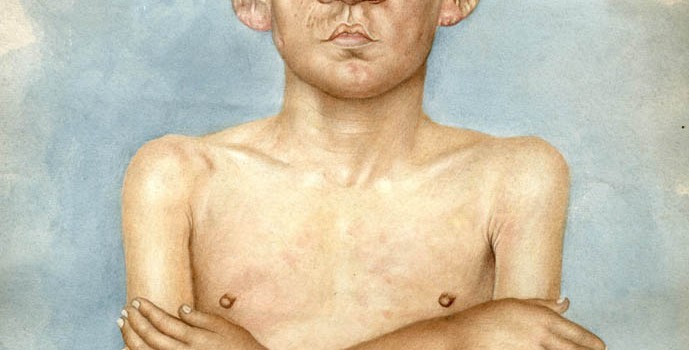 Leprosy collections in the Archives

To support World Leprosy Day on 26 January, we thought that we would highlight some of the collections that contain material on leprosy.

We hold one file of papers of Stanley George Browne, (1907-1986). These reflect his work and interest in the field of leprology and contain manuscripts and reprints of articles written by Browne whilst employed by the Leprosy Service Research Unit, Uzuakoli, Eastern Nigeria.

Browne was a medical missionary who worked at the Baptist Missionary Society Hospital at Yakusu in the Belgian Congo in 1936. In 1940, a leprosarium was opened at Yakusu and the American Mission to Lepers sent out a new drug, diasone, which Browne used successfully. In 1958 he returned to England for a year; he was appointed senior leprologist at the Leprosy Research Unit, Uzuakoli in eastern Nigeria in 1959 and continued his work with trials of new drugs, in particular B663 or clofazimine. Browne was invited to be chairman of the working group on the treatment of leprosy at the International Congress on Leprosy at Rio de Janeiro in 1963 and advised on the establishment of the All Africa Leprosy Training and Rehabilitation Centre, in Adis Ababa. He succeeded Robert Cochrane as Director of the Leprosy Study Centre, London, 1966-1980. Browne campaigned against the stigma attached to leprosy and his work in this field was recognised when he was appointed an OBE in 1965 and the CMG in 1976.  It is not recorded why or how his papers ended up at the School.

The papers of Major General Sir Leonard Rogers (1868-1962), include some material on leprosy including some drawings by HS Mandal of leprosy cases in Calcutta, manuscripts and reports.  Rogers worked in India for nearly 30 years on many different tropical diseases. The treatment of leprosy was a life-long interest. Rogers investigated efficacy of chaulmoogra oil on leprosy and encouraged research into a cure for leprosy while working in India; instrumental in foundation of the Calcutta School of Tropical Medicine, and in foundation of the British Empire Leprosy Relief Association. He was a lecturer at the School between 1921-1931.

The collection of Sir Patrick Manson (1844-1922), founder of the School and tropical medicine specialist include a diary from his work in Formosa in China, describing 58 cases of leprosy.

There are also references to leprosy in the papers of Sir Ronald Ross, the discoverer of the mosquito transmission of malaria, this collection contains over 20,000 items and although the main area of Ross’ expertise was malaria, he collated material on all tropical diseases.

For further information on the Archives, see our website at: http://www.lshtm.ac.uk/library/archives/index.html