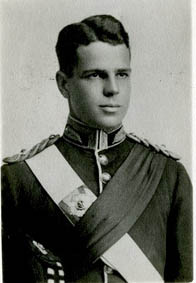 Sir Ronald Ross and his wife, Rosa, had four children, the eldest Ronald Campbell was killed at the start of the war in the retreat from Mons. Ross writes about his son’s death in his Memoirs which were published in 1923. His son had just obtained his commission as Second Lieutenant in the Royal Scots Regiment. Ross describes him as a born soldier and popular with all his comrades. The Royal Scots were involved in the retreat from Mons and at the end of August he was reported missing. It was some months later when Ross heard that he had been shot on 26 August near to the village of Audencourt. He was 19 years old.

Above is an image courtesy of Sherborne School where he attended between 1909 and 1912, he was the first Old Shirburnian to be killed in the First World War.

The Ross collection contains over 20,000 items of correspondence, reports, publications, photographs and much more. However as Ross sold this collection in 1928, he arranged it himself and there is very little of a personal nature in the papers. Therefore there are only a few mentions of the loss of his son, however the loss is evident on reading the poems that he wrote during the war. For example, here are the first few verses of a poem entitled Memories written in 1918:

The night is deep. Our loss
Sleeps, aches, and waking springs.
We sleep; and yet we toss
Remembering many things,

Each in a woollen shoe;
His look was calm and wise;
And Heaven itself came true
Within his infant eyes.