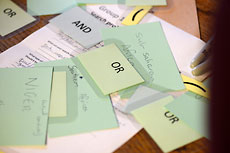 Instruction to Students in the Use of the Library from 1947 In 1947, the then Librarian, Cyril C. Barnard, wrote a history of the School’s Library. In it, he included a section on the information skills training offered to students over the years. As you can see from the transcript below, things haven’t changed very much.

Instruction to Students in the Use of the Library.

This was begun in a small way in March, 1926. The Librarian gave a twenty-minute talk to new students at the beginning of each term, explaining the use of the library and the chief bibliographical reference works. These talks were given in the evenings after regular hours and were well attended.

In 1931 this instruction was extended to a course of three lectures at the beginning of each session to each of the three classes, viz., Tropical Medicine, Public Health, and Bacteriology. The first lecture in each course was a conducted tour of the library, during which its chief contents were pointed out, regulations for its use explained and the classification and catalogue described. The second talk dealt with the principal reference works, abstract journals and periodical indexes, and was varied to suit the special needs of each of the three classes. The third was a lesson in the compilation of lists of references and bibliographical citation. Practical work consisted in locating papers from scanty data. Attendances were not good at first, but they improved later and finally became almost 100 per cent., the students attending as a matter of course. In later years the time allotted to the Tropical Medicine class for this purpose was considerably curtailed, but the Bacteriology class was allowed three periods of three hours each. As this class never exceeded twelve students, it was possible to devote more time to practical work and the librarian could give personal attention to each student. In 1934 for the first time, the talks were given in one of the lecture theatres instead of in the library, and several members of the teaching staff attended. In 1937 the three lectures to the Public Health class were spread over the three terms instead of all being concentrated into the first term, and extra time was allowed for practical work. These lectures were inevitably suspended for the six years of the war when there were no regular students in the School, but were renewed in 1945 on similar lines.

If you would like to attend similar training in 2014/15, see our website for details of the classes we offer.