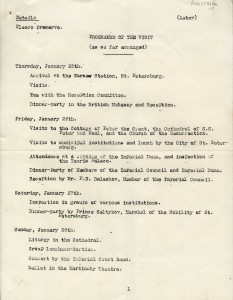 In January 1912, Sir Ronald Ross was invited to join an official visit to the Russian Duma. This was a reciprocal trip to St. Petersburg and Moscow after members of the Russian Duma had visited the UK Parliament.
The group left Victoria Station on 22nd January 1912, crossing into Russia from Germany. Travelling in the Tsar’s personal train to St. Petersburg, they reached the city on the 25th. 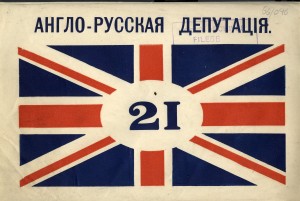 In his Memoirs, Ross comments:
‘Most of the party left London wearing fur coats and Astrakhan hats, but I was too busy to make such preparations, and joined them in an appalling leather-lined fishing ulster [coat] surmounted by a top-hat. These were not admired by my companions; but the tables were turned when we reached Russia. There the crowds mistook the respectably dressed members for Russians and maintained dead silence – until I appeared, when they recognised a true Briton and cheered themselves hoarse! Thereafter the order always was, “Ross, wave your top hat will you!”’
Ross comments on the luxuries he encountered, including ‘ 2 banquets a day, each commencing with the ‘zakusa’, a gourmet’s cold collation with caviar, vodka, and a cigarette, after which the doors were opened for the serious eating!’ 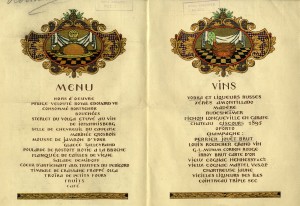 A menu and musical programme for a Banquet given in Moscow

They met the Tsar and Tsarina on 29th January. Ross comments that the Tzarina spoke perfect English and ‘was a beautiful lady’, but ‘ There was a listening fear in her regard.’ As a retrospective comment (his Memoirs were published in 1923), he says ‘she may have divined the awful future’ (ie the Royal family’s death at the hands of Bolshevik revolutionaries in 1918)
The group went from St. Petersburg to Moscow and left for London on February 5th. Ross commented that ‘the Russians do not have catarrhs nearly as often as we [the British] do.’
All material is from the Ross Collection in LSHTM Archives.

Look out for more images of Ross’s Russian trip on Twitter: @LSHTMarchives 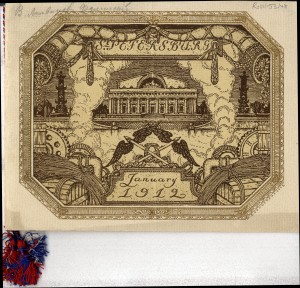 Programme and menu of the Russo-British Chamber of Commerce