In June 1915, the minutes of the London School of Tropical Medicine show that Dr H McCormick Hanschell was called up for service in the Navy and then embarked on a very interesting mission in East Africa.

Hanschell was born in Barbados and received his primary education in Bridgetown. He subsequently came to London and attended London University and studied medicine at St. Bartholomew’s Hospital. In 1910 he took the course at the London School and thereafter acted as demonstrator under Dr. H B Newham. He then assisted as demonstrator in each of the three departments – Protozoology, Helminthology and Entomology under Colonel Alcock.

At the outbreak of the First World War Hanschell was recalled to the Albert Dock Hospital but soon he was made a Medical Officer in the Navy. After a period at Royal Hospital Haslar (a military hospital for the Royal Navy in Gosport) he was chosen as Medical Officer for a little-known but hazardous and highly successful expedition to Central Africa. The Battle for Lake Tanganyika was a series of naval engagements that took place between the British Royal Navy, the Belgian Navy and the Imperial German Navy between December 1915 and February 1916. The intention was to secure control of the strategically important Lake Tanganyika, which had been dominated by German naval units since the beginning of the war. The British forces—consisting of two motor boats named HMS Mimi and Toutou were under the command of Lieutenant-Commander Geoffrey Spicer-Simson. There were 28 personnel on the expedition with Hanschell as Medical Officer. The boats were transported to Cape Town in South Africa by boat and from there by railway, by river, and by being dragged through the African jungle, to the lake. 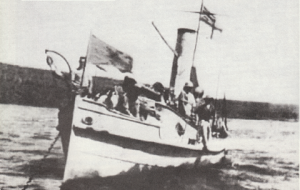 In two short engagements, the small motor boats attacked and defeated two of their German opponents. In the first action, on 26 December 1915 the Kingani was damaged and captured. In the second, on 9th February, the small flotilla overwhelmed and sank the Hedwig von Wissman. Developments in the land-based conflict caused the Germans to withdraw from the lake, and control of the surface of Lake Tanganyika passed to the British and Belgians.

For the part he played in the expedition, Hanschell was mentioned in the Royal Navy Despatches, Gallantry Awards and Honours in January 1917 where it states:

Surgeon Hother McCormack Hanschell, R.N. In recognition of his services with the Tanganyika Flotilla. The comparative immunity from sickness enjoyed by the members of the expedition was due to the unremitting care bestowed by Surgeon Hanschell on the health of the personnel and on the sanitary state of the camps and vessels.

The above information has been sourced from Wikipedia (http://en.wikipedia.org/wiki/Battle_for_Lake_Tanganyika) and the History of the School of Tropical Medicine in London (1899-1949) by Sir Philip Manson-Bahr, 1956. The School history does not give further information on what Hanschell did after the expedition although one source states that he was injured by shrapnel and suffered from malaria, then he was evacuated to Northern Rhodesia and returned to England in 1917. It would be interesting to discover more about Dr Hanschell and what else he achieved in his career so we would welcome any information that could be passed onto us. Please contact the Archives Service at: archives@lshtm.ac.uk