An exhibition by the International Centre of Eye Health (ICEH) is currently on display in the Keppel Street Foyer at the School. The primary focus of the exhibition is to raise awareness of the eye health research being conducted in LSHTM amongst members of staff and students at the School, as well as visitors. Material has been kindly loaned from the Royal College of Ophthalmologists. 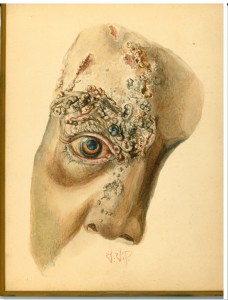 Illustration from the Elliot Collection

The LSHTM Archives holds material relating to eye health. One of our notable collections is that of Robert Henry Elliot, who was an ophthalmic surgeon and a lecturer in ophthalmology at the School from 1919 to 1929. Elliot spent the early part of his career in India where he served in the Indian Medical Service, but soon returned to civil medicine. By 1904, Elliot had been appointed superintendent of Madras Ophthalmic Hospital and soon established it as a centre for investigation and treatment of eye diseases, in particular, the treatment of chronic glaucoma. Elliot left India in 1914 and took up the post of ophthalmic surgeon to the Prince of Wales Hospital. By 1919 Elliot had lectured at London School of Tropical Medicine and the Royal College of Surgeons. During his career, Elliot also served on the British Medical Association’s Council for five years and successfully campaign for improved conditions and pay for medical officers in India. 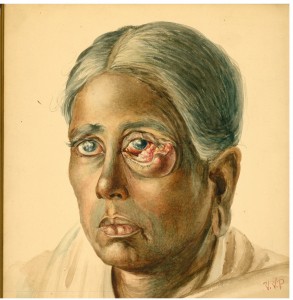 Illustration from the Elliot Collection – Woman with eye disease

Much of the Elliot collection is comprised of stereoscopic photographs, water colour illustrations, and black and white images of patients inflicted with eye disorders. Catalogues outlining patients’ details and the eye disorders that inflict them also accompany the images. When Elliot came to the School in 1919, his watercolour illustrations were placed in the School’s museum and remained with the school there after. In addition to this material, the Archives also hold the syllabus of Elliot’s taught course at the LSHTM. In July 1922, the course was broken down into four lectures and focussed on ‘native remedies’, eye diseases that were abnormal to tropical countries and how race influences eye disorders.

In addition to Elliot’s collection, the School has access to 300 digital images from the Arthur MacCallan archives that document eye disease in Egypt, where he was appointed ophthalmologist in 1903 in the department of public health in Cairo. During his career, MacCallan successfully opened ophthalmic hospitals in each Egyptian province, and six travelling hospitals. MacCallan was also keen to encourage and enhance the knowledge of Egyptian ophthalmic surgeons, where regular lectures and clinical instruction were provided. MacCallan returned to England in 1924, having successfully implemented mass treatment of ankylostomiasis and bilharziasis, and opened up his own private practice as well as serving as ophthalmic surgeon to two London hospitals. In 1935 he was appointed as second president of the International Organisation against Trachoma.

If you have any queries regarding these collections or what else the Archives hold on eye health, please contact us at archives@lshtm.ac.uk