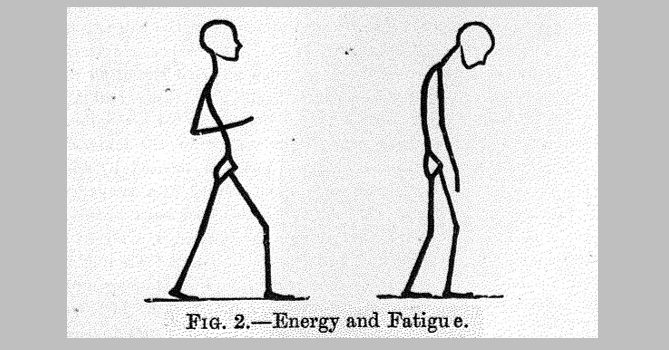 As my colleague Chris said in this blog a couple of weeks ago, we are in the process of cataloguing 3000 pamphlets that were locked away in a vault for many years.

Here’s one: “On Being Tired”, by a Scottish physician named Sir Thomas Lauder Brunton, published in 1909.

In his pamphlet, Brunton notes that the signs of weariness first appear in the eyes, which “lose their lustre” and “sink into the head”. Then “the head tends to droop, the back to bend, the arms to fall helplessly down, and the knees to bend under the weight of the body.” Although Brunton finds that the most frequent cause of weariness is “excessive muscular exertion”, he also recognises that “depressing emotions, such as worry or sorrow, may produce both an expression of weariness and a sensation of weariness”.

I hope that Reading Week has helped LSHTM staff and students feel less worried and weary, more happy and vigorous, and ready for the second half of term.

[P.S. Thomas Lauder Brunton (1844-1916) was known for more than a pamphlet on fatigue.  Wikipedia tells me it was he who discovered that amyl nitrite could relieve the pain of angina pectoris. He was knighted in 1900, became a Baronet in 1908, and at some point converted to Islam taking the name of Jalaluddin Lauder Brunton.]