Sir Philip Henry Manson-Bahr was an eminent physician and senior staff member at the London School of Hygiene and Tropical Medicine (1919-1947) where he specialised in tropical medicine. He was also a gifted artist. 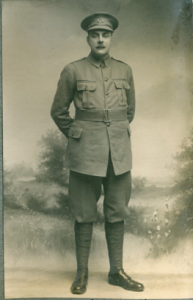 In 1909, shortly after qualifying in medicine, Philip Bahr (as he was then) led the Stanley Research Expedition to Fiji to investigate filariasis and dysentery. Fiji, an archipelago of 330 islands in the Pacific was at that time a British crown colony.   Accompanied by his wife Edith, a daughter of Sir Patrick Manson (the ‘father of tropical medicine’), he settled in the village of Loma Loma on the island of Vanua Balavu.   For over a year their accommodation was a ramshackle hut with a verandah on the side on which Bahr built a laboratory to house equipment and supplies brought out from England and to carry out the work.

By any standards the two research projects were highly specialised challenges and especially for the young and relatively inexperienced scientist who was on his own except for his assistant W.J. Muggleton from London and a Fijian medical student, Jesse. Without access to a good medical library and other colleagues Bahr resorted to writing to his father-in-law in England for advice about the insect vectors and nematode worms.  In one letter, dated 2 March 1910 Sir Patrick replied in great detail  :  “Your first letters from Fiji arrived a few days ago …. I spent this afternoon restaining and mounting the four filaria slides. The oil you had mounted them with had nearly all evaporated and the staining had become so faint that it was impossible to make out anything until they had been restained. This I did with haematoxylin mounting with balsam. They will keep therefore against your arrival in case you might want to refer to them.  … The absence of periodicity is a very important point ; but I confess to complete failure to make out any morphological difference between the filariae you mark philippensis and nocturna respectively …” (Quoted from letter in Wellcome Library Collection : WTI/RST/F/24/25/33)

The 192 page memoir on Filariasis and elephantiasis in Fiji is profusely illustrated throughout with Bahr’s paintings, line drawings and photographs.  There are approximately thirty-five illustrations based on Bahr’s original drawings, most of which are dated 1911, and may have been completed either in Fiji or after he was back in London.  Most scientists had to prepare their own illustrations but for Bahr it was probably a particular pleasure as painting was one of his hobbies.   Even so, Sir Patrick offered some words of advice in his letter dated 30 March 1910 : “I cant (sic) follow your description of F. Philippensis. Let me suggest to you to make a block which would print an outline of a filaria  – something like the sketch on margin –  …. A thing like an outline stamp – and record on prints of this the various new features you recognise from time to time in your examinations of filaria, bearing in mind that the filaria is round and that the appearance of any features when seen in profile may be quite different when seen so to speak full face” (Quoted from letter in Wellcome Library Collection : WTI/RST/F/24/25/33)

Below are some examples of Bahr’s illustrations of insects and nematode worms reproduced in Filariasis and elephantiasis in Fiji (the scientific names are from Bahr, 1912): 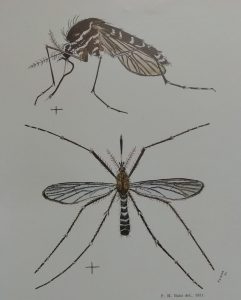 A dissection of the head and proboscis of the mosquito Stegomyia pseudoscutellaris infected with microfilariae.  The drawing with made with the aid of a camera lucida, an optical device used as a drawing aid especially useful for microscopical illustration (p. 22) 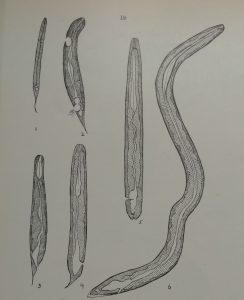 Drawings (pen and ink) of living specimens of larval filariae taken on different days from the mosquito Stegomyia pseudoscutellaris to show different stages in the development of the intestinal canal. Drawn to scale with the aid of a camera lucida. These drawings of live material would have been made in Fiji in 1911.  (p. 19)