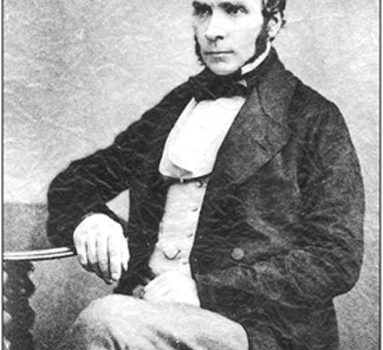 He is perhaps most widely known fo r his observations and discoveries during a cholera outbreak in Soho, London in 1854. Snow disagreed with the contemporary thinking which held the belief of ‘miasma’ or ‘bad air’ was the cause of disease. After speaking to residents in the area of Broad Street, Soho he identified that the source of the cholera outbreak was the public water pump. After demonstrating patterns in the disease using maps, Snow was able to convince the local council to disable the pump by removing the handle.

John Snow, however, felt that while the removal of the handle was helpful, it was probably likely that the outbreak was already in rapid decline.

Even after the outbreak, however, there was disagreement regarding the means of transmission of disease. It took another 12 years for William Farr in 1866 to validate Snow’s findings during another cholera outbreak. Snow’s text, ‘On the Mode of Communication of Cholera’, outlines the history of cholera with accompanying data which confirmed his theories. The text was revised, expanded, and published as a second edition in 1855.

Here at the London School of Hygiene & Tropical Medicine, the John Snow Lecture Theatre; opened by HRH The Princess Royal, is a lasting tribute to the man who helped promote a better understanding of medicine in a range of fields.

The archives of the London School of Hygiene & Tropical Medicine unfortunately do not contain a collection of John Snow. However, there are many resources available for more information on cholera or the history of public health, some examples below.

On the Mode of Communication of Cholera – John Snow, 1855: Available through the library

Rogers Collection – which contains papers relating to cholera: Available through the archives

Budd Collection – which contains publications on cholera, typhoid and cattle-plague: Available through the archives