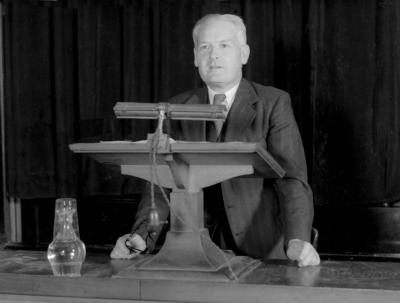 May 20th is International Clinical Trials day, and so today we celebrate the work of Sir Austin Bradford Hill – a pioneer in clinical trials.

Sir Austin Bradford Hill is best known for his work with Sir Richard Doll on the carcinogenic effects of smoking and on the use of randomisation in clinical trials of new drugs but he was also the statistician on the Medical Research Council Streptomycin in Tuberculosis Trials Committee. Their study is generally accepted as the first randomised clinical trial. His career began as a pilot during WW2 which was cut short when he contracted Tuberculosis while in service at Gallipoli. Following his recovery he initially studied economics but went on to research in epidemiology and statistics. He joined the London School of Hygiene & Tropical Medicine in 1927 and went on to become Reader in Epidemiology and Vital Statistics in 1933. In 1937 he published the first edition of Principles of Medical Statistics, a textbook which has influenced generations of medical statisticians and epidemiologists.

His time at The School included many achievements with the Department of Medical Statistics and Epidemiology ranging from the effectiveness of inoculation procedures in severe polio epidemics to his crowning achievements and developments in pioneering clinical trials. While Bradford Hill was mostly known for the clinical trials of the link between smoking and lung cancer, but his impact on clinical trials in general have impacted the world through clinical trials of new products of the pharmaceutical and chemical industries. While at The School it was Bradford Hill who played a pivotal role in the development of studies in occupational health and occupational medicine. Additionally, a working tradition can be traced back to Bradford Hill and his colleague Greenwood for a long lasting collaborating between the MRC and The London School. This was alongside a sense of mutual respect and unqualified cooperation between epidemiologists of whatever persuasion initiated by Greenwood and legitimised ‘Medical Statistics’; but it was firstly developed and co nsolidated under Bradford Hill, ‘who fought the good fight to have his department recognised as pre-clinical rather than non-clinical.’ (Prevention and Cure, p.118.)

Bradford Hill retired in 1961 and was knighted the same year.