Sir Ronald Ross and malaria in the First World War

Today is World Malaria Day, to mark this day the Archives service will be posting blogs that look at malaria from its collections. 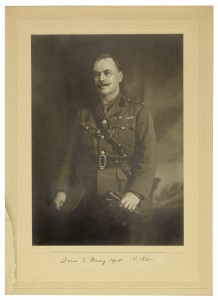 The LSHTM Archives Service holds the records of Sir Ronald Ross, discoverer of the mosquito transmission of malaria and the first Briton to be awarded the Nobel Prize for Medicine. He made a significant contribution to the First World War through his research and treatment of soldiers suffering from tropical diseases, primarily malaria and dysentery.

As the First World War progressed it was necessary to send soldiers to countries where tropical diseases were virulent. Malaria was a particular problem in Salonika, Mesopotamia, Palestine and East Africa. The casualties from tropical diseases outnumbered those inflicted by the enemy by 30 to 1, and in these places it was a war of germs rather than of guns. Ross spent much of the war treating servicemen suffering from malaria and also continuing his research into the prevention of the disease both at home and overseas.

Towards the latter part of the war, large numbers of soldiers were returning to Britain suffering from malaria. Measures were taken to protect the civilian population and to prevent indigenous infection amongst British troops. These included the appointment of consultants in malaria and the establishment of concentration centres which increased the control and treatment of those suffering from malaria. However, even though there were special measures in place, more than 500 civilians became infected with malaria. Ross corresponded with colleagues working at the concentration centres and treated patients at the Malaria Department of the 4th London General Hospital, part of King’s College Hospital.

At the end of the war, Ross continued his advisory work on malaria, including the arrangements for soldiers chronically affected by the disease. In 1919 he was appointed the Malaria Consultant to the Ministry of Pensions. 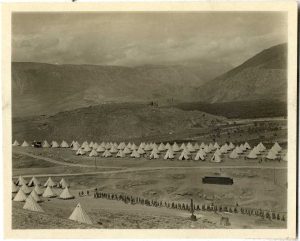 Although Ross held a number of roles during the war, there were times when he was not employed by the War Office, and this caused one of his colleagues, David Thomson, with whom he worked in Alexandria to write the following in June 1916: ‘I think it is high time that questions were asked in Parliament as to why the greatest tropical sanitary expert in the world is not at present occupying some army post worthy of his knowledge and ability. I am perfectly certain that the American sanitarians including Surgeon General Gorgas are looking with blank amazement or will look when the sanitary faults in the East come to light and they will wonder why a blunder so preposterous was made, in that you were not employed in a post of high administrative authority with regard to the sanitation in the campaigns in warm climates.’

For further information, please contact the Archive Service at archives@lshtm.ac.uk or search our online catalogue at: http://calmview.lshtm.ac.uk/calmview/