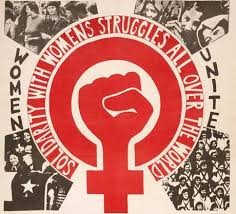 The roots of International Women’s Day (IWD) lie in the New York garment workers’ strike of 1908, when 15’000, predominantly Jewish, members of the Ladies’ Garment Workers’ Union downed tools and marched through New York’s Lower East Side, demanding shorter hours, better pay and the right to vote. Following the strike in 1910, German socialist Clara Zetkin put forward a proposal at the International Conference for Working Women for an International Women’s Day. The proposal was unanimously agreed upon and thus an annual day to campaign for women’s rights around the world was born. Throughout the 20th Century IWD spread across the world, and nowadays is less closely associated with the labour movements of the Global North. The United Nations first observed IWD in 1975, using it as an opportunity to highlight the achievements of women. Whilst in some countries the day is celebrated with official holidays and gift giving, for others, the day remains an important opportunity to protest against gender inequality.

To celebrate International Women’s Day, a selection of books about women, health and feminism will be displayed in the library reading room. See below for our top pick of recommended books. Other books relating to women’s and gender studies can be found under the classmark ZVB.W (in the Barnard Room).

Modernising scientific medicine emerged in the nineteenth century as an increasingly powerful agent of change in a context of complex social developments. For women, medicine came to offer not just treatment in the event of illness but the possibilities of participation in medical practise, of shaping social policies and political understandings, and of altering the biological imperatives of their bodies. The essays in this collection explore various ways in which women responded to these challenges and opportunities and sought to use the power of modernising Western medicine to further their individual and gender interests.

This book presents thirteen multidisciplinary case studies that demonstrate how science and advocacy can be creatively merged to enhance the agency and status of women. Chapters are enriched by short films produced by local filmmakers that give background about programs in India, the United States, Mexico, Nicaragua, Zimbabwe and South Africa. Women’s Empowerment and Global Health provides cutting-edge and inspirational examples of programs that point the way toward achieving women’s equality and fulfilling the right to health.

Drawing on more than a decade of research in the United States and Brazil, this book focuses on how the philanthropic, social responsibility, and business practices of various corporations use a logic of development that positions girls and women as instruments of poverty alleviation and new frontiers for capitalist accumulation. With a keen eye towards justice, author Kathryn Moeller concludes that these corporatized development practices de-politicize girls’ and women’s demands for fair labour practices and a just global economy.