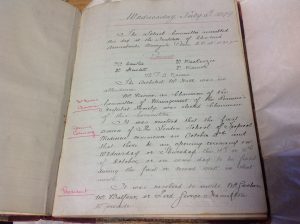 The Archives Service is pleased to announce that we have borrowed nine volumes of the London School of Tropical Medicine’s early minute books dating from 1899 when the School was established to 1924 when it became the London School of Hygiene & Tropical Medicine and received its Royal Charter. These have been borrowed from the Seafarer’s Hospital Society (formerly the Seamen’s Hospital Society) with which the original School was established and we are very grateful that they have kindly loaned these to us. Minutes from 1924 to the present day are held in the Archives. 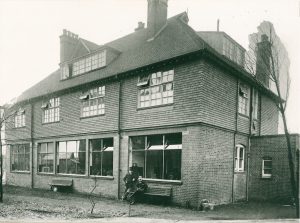 The Archives team will use the information in the minutes to discover more about the early history of the School and the issues that were being discussed by the School Committee. Researching the minutes will hopefully uncover new information about some of the historical events that occurred during this period including expeditions, staff recruitment, the First World War, the move from the Albert Dock hospital in the East End to Endsleigh Gardens and new School being formed in 1924. We will be writing blogs and tweeting about interesting facts that we find over the next few months.

We are hoping to put some of the minute books on display during the 120th anniversary celebrations and researchers are welcome to study them in the Archives. If you are interested, please contact us at archives@lshtm.ac.uk