To follow up a recent post on Artwork at LSHTM, we are focusing on some more wonderful pieces of art that are on display in the Keppel Street building.

This weekend (21-22 September) visitors will be able to view these pieces as part of Open House London. 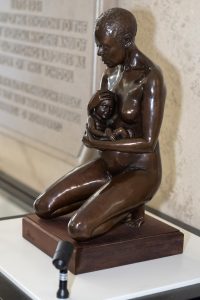 WOMAN is a bronze statue created by artist Moira Purver to raise awareness of a study into treatment for postpartum haemorrhage and to highlight maternal health research at LSHTM.

It depicts a woman on her knees holding her new baby in her arms just after giving birth. According to Purver who is a member of The Society of Women Artists, the sculpture shows the ‘happiness, joy and overwhelming love a mother feels the first time she holds her baby’. It also shows the vulnerability of a new baby and brings home that we must do all we can to make sure babies have their mothers alive to care for them. 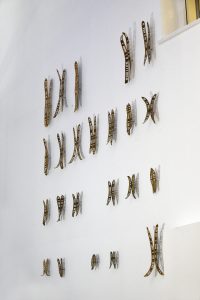 The complete set of chromosomes for an individual is called a karyotype. It is often arranged as here in size order, with the sex chromosomes at bottom right. The two ‘X’ sex chromosomes show that it is a karyotype for a person who is genetically female. Seed pods from flame trees bear a striking resemblance to photographs of chromosomes as seen under a light microscope. In this sculpture the likeness has been enhanced by removing segments of the pods, allowing the play of light and shadows.

Judith Glynn is a Professor of Infectious Disease Epidemiology at LSHTM. Her sculptures depict human life and interactions in a variety of media, and are held in collections across Europe. Karyotype was made for her solo exhibition Aspects of Life in Clare Hall, Cambridge.

This mobile sculpture is made up of the four DNA nucleotides, A (adenine), C (cytosine), T (thymine), G (guanine), that carry all of our genetic information. The colours 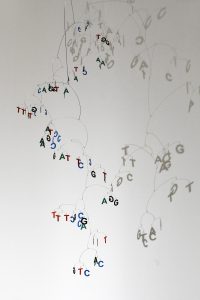 are those that are used in the output of automatic DNA sequencing machines. The nucleotides are arranged into all possible variants of the DNA nucleotide triplet ‘codons’ which are the instructions our bodies use to turn the DNA code into protein. The sculpture takes the form of a helix, with increasing division (from a single codon to two, then four, then eight per branch) to represent the role of DNA in cell division and reproduction.

Codons was made for the 2016 Bloomsbury Festival, the genetic code responding to the Festival theme of Language.

In John Snow’s Victorian London, sewers emptied straight into the Thames, leading to contamination of drinking water, infection and disease. The Broad Street pump in Soho was contaminated by cholera bacilli when infected sewage from a broken pipe leaked into a community well in the summer of 1854. 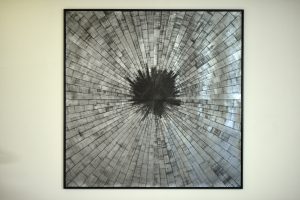 Anyango was drawn to nineteenth century images of women collecting water for household use which could be contaminated, thus unknowingly investing in their own demise. She visited the Victorian sewers to research the drawing.

Tunnel is map-like, depicting a flowing pathway or conduit. It references Snow’s disease map, showing a central area from which lines and pathways radiate – an abstract vision of the infected Broad Street pump and its devastating impact.

Tunnel is drawn in a way that makes it shift and change according to one’s perspective. While diseases themselves may not change, our understanding of them alters, the imperceptible becoming perceptible through a shift in position.

This artwork was originally commissioned for an exhibition, Cartographies of Life & Death: John Snow & Disease Mapping, held at LSHTM from March to April 2013 to commemorate the bicentenary of John Snow’s birth. (Curator: Julie Hill, funded by the Wellcome Trust and Arts Council England). Tunnel was purchased with funds from 2009 Gates Award.