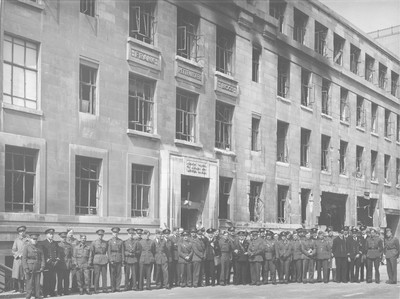 On Friday 8th May, the country will be celebrating the 75th anniversary of VE Day, (Victory in Europe Day) when the Allies of World War II formally accepted Nazi Germany’s unconditional surrender of its armed forces.

At the outbreak of war in 1939, it was planned for the School to remain in London for as long as possible but we did have the offer of moving staff to Cambridge. In the end, we remained for all of the war and offered space to other organisations including the Medical Research Council, London staff of the Rockefeller Foundation, and the ARP warden and his staff. The School suspended regular courses in 1942 but replaced them with 14 day intensive courses on tropical medicine for medical officers, over 2000 servicemen were taught over the course of the war.

The School was bombed on the night of Saturday 10 May 1941 at about 10.45pm, four people were in the building at the time and fortunately none of these were hurt. A sixth of the building was destroyed partly by the explosion and partly by fire, as it was not until morning that a fire brigade could be spared to come.  The explosion wrecked many rooms in the Public Health Department and the Departments of Parasitology and Chemistry, and ruined exhibits from the School museum which had been moved to the basement for safe keeping from their original position on the second and third floors above the Library. This part of the School was not rebuilt until the early 1950s.

The author Graham Greene undertook wartime fire watching duties in the Keppel Street building and in Senate House and used his experiences in his post-war novels the Ministry of Fear and End of the Affair.

The Archives holds records on a number of aspects of the war including administrative records, diaries, photographs and recipe leaflets from the Nutrition collection which also holds records relating to civilian internment camps in Hong Kong,  and it should be remembered that the war did not end for everyone on 8 May as Great Britain was still at war with Japan, V J day (Victory over Japan) was not until 15 August.

The papers of Dr Dean Smith, who became a Lecturer in the Department of Human Nutrition at the School in 1947, record the  time he  spent interred in Stanley Internment camp in Hong Kong, where he undertook research on the malnutrition he saw developing due to poor diet.  The camp held 2,500 civilians, men women and children, and was not run as a POW camp exactly, as civilians were able to organise themselves into committees under the Japanese command. These photos taken by Dr Dean Smith show men suffering from malnutrition and also men working in the camp.

Smith wrote about his experiences in a report which details the problems created by a poor rice based diet. Illnesses included Beriberi which he suggested controlling by the production of Vitamin B1 by the creation of yeast, he wrote this recipe.

The Nutrition collection also holds material from the Changi internment camp. Following the fall of Singapore to the Japanese army in February 1942, a prisoner of war camp was established in Changi, Singapore. The Japanese used the British Army’s Selarang Barracks to hold around 50,000 allied prisoners of war, predominantly British and Australian. This series comprises of 400 pages of medical inspection papers concerning individuals held in the Changi internment camp who were suffering from various forms of malnutrition. The information on individuals includes their name, age and notes on their condition. Many people were seen several times and this is cross-referenced throughout the papers. The information was compiled over a period of two years by Michael F A Woodrufff. Woodruff was a Medical Officer in the Australian Army Medical Corps and had been captured by the Japanese and held in the camp until the end of the War. The work carried out was under duress but proved to be valuable data for the MRC Special Report No.274 which was completed after the War. The raw data in this series was the basis for the report which brought to light a number of interesting discoveries concerning Asiatic diet and nervous disorders linked to malnutrition.

For further information on the archives, please contact archives@lshtm.ac.uk