Tree of knowledge, Queen V and a little library 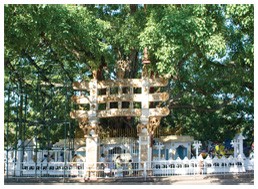 Another member the ficus family of trees (see Library blog post “Rubber snakes”, 4/3/2014) is the Bo, or Bodhi, tree (ficus religiosa). The word “budh” or “bodhi” is associated with knowledge, wisdom and enlightenment. These trees, venerated by Buddhists & Hindus, are all said to have been propagated from the original tree in Gaya, northern India, under which the Buddha gained Enlightenment. Over millennia, many cuttings from the Tree have been transplanted in distant places.

One such tree, said to have been planted in 1042 AD, stands on the banks of the Kalutara River, about 40 km south of Colombo, Sri Lanka. Around 1880, when Sri Lanka (then Ceylon) was a British Crown Colony, the railway was being built along the coast, and the British engineers decided to cut down the tree because it was in the way of the railtrack. Local people’s protests were in vain – the officials were adamant, the tree was coming down. As a last resort, people sent a petition to Queen Victoria, via the Prince of Wales (later King Edward VII) who had visited the Island few years previously. The Queen immediately sent an order overruling local officials: “Do not touch the Bo Tree”. On the map, it is possible to see a small deviation of the railtrack as it passes within a few feet of the Tree. 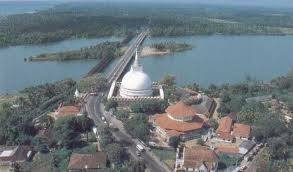 The Tree is to the left of the white stupa, between the railway & the highway.

Today the Tree, and the surrounding precinct, is under the care of a local charity – Kalutara Bodhi Trust. On the north bank of the river, the Trust has a community centre, which was built on the site of my grandparents’ house, where I was born nearly seventy years ago. The main feature of the centre is a Library, serving the local community. My friends tease me: other people may get a blue plate to mark the place where they were born; I get a whole Library! 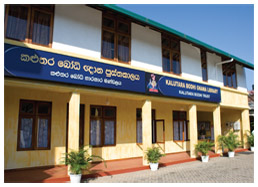