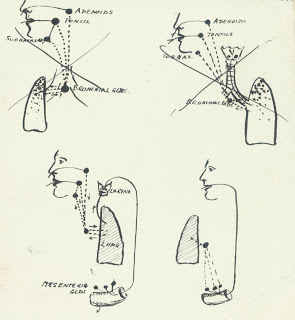 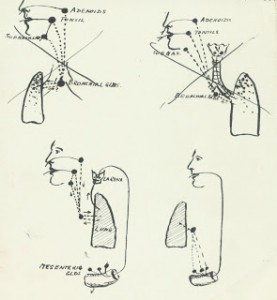 Drawings by Sir Arthur Newsholme for his studies on tuberculosis, c.1907

To mark World Tuberculosis Day on 24th of March, we would like to highlight the archive of Sir Arthur Newsholme, a pioneer in public health who took a special interest in TB.

Sir Arthur, who was born in Haworth, Yorkshire, took his medical qualifications in London and went on to serve as the Medical Officer of Health for the parish of Clapham in the late nineteenth century. In the same role in the parish of Brighton, he campaigned against the contamination of the local milk supply by the use of cows suffering from tuberculosis, even bringing an infected cow’s udder to a meeting in 1897 to dramatise his case.

Whilst serving as a Medical Officer of Health, Sir Arthur conducted research in epidemiology, particularly relating to tuberculosis. He has been credited with demonstrating that the decline in tuberculosis in England and Wales from 1838- 1894 was due to the segregation of poverty-stricken sufferers into workhouses, rather than improvements in public living standards. He noticed that in Ireland, where poor relief continued to take place in the home, the death rate from TB rose instead of falling during the same period.

Sir Arthur continued to do battle with the disease as Principal Medical Officer for the Local Government Board from 1908-1918 and as a member of the Army Sanitary Committee during the First World War. He was knighted in 1917 and retired in 1919 but continued to consult, write and lecture on public health until his death in 1943.

Sir Arthur’s papers are held in the LSHTM Archives and include private correspondence, Annual Reports of Local Government Boards and articles, reports and notes on tuberculosis, with particular reference to compulsory notification. The archive also holds his writings on other areas of medicine, notably infectious and epidemic diseases and all aspects of public health including its ‘social’ and ‘moral’ dimensions.