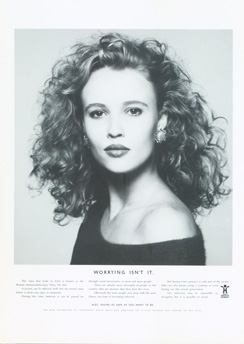 The catalogue of the papers of Kaye Welling is now available on the LSHTM archives catalogue. The papers relate to her work she undertook on HIV/AIDS public education and media coverage during the 1980s-1990s whilst based in the Centre of Sexual and Reproductive Health (CSRH) at the School in particularly the European Commission ‘Concerted Action’ project, ‘Assessing HIV/AIDS Preventive Strategies, in partnership with the University Institute for Social and Preventive Medicine (IUMSP). These project collected and analysed the HIV public health education campaigns of various European countries and is reflected within the archives through press advertisements, photographic prints of posters, ephemera, television advertisements, postcards and booklets produced within each respective country, 1986-1994. Professor Kaye Welling is now more widely known for her work on the National Survey for Sexual Attitudes and Lifestyle (NATSAL). Prior to this her attention to sexual health was focused on HIV/AIDS working with the Health Education Authority (HEA) and the LSHTM from the 1980s onwards on HIV/AIDS public education and safe sex promotion campaigns. Part of the archive reflects her early affliation with the HEA through the UK press cuttings collection that provide a record of newspaper and other media publications relating to AIDS between 1983-1993. This series accurately captures the acute fear of the disease in the early years and the often explicit homophobic reaction towards it, often being depicted as the ‘Gay Plague’. The EC ‘Concerted Action’ material is linked to the Centre of Sexual and Reproductive Health collection also held at the LSHTM archives and provides photographic material in the form of prints and 35mm covered slides of European HIV/AIDS public health education campaign material. This collection however shows the range of material produced not only depicting the poster campaigns but also magazine and other publication advertisements, stills from television and cinema adverts and postcards, leaflets and memorabilia produced. In total there are items collected from twenty three countries including additional material collected from Eastern and Central European countries such as Hungary, Romania and the Ukraine.