Who was reading ‘How to Have Sex in an Epidemic’?

In 1983 Michael Callen and Robert Berkowitz wrote the ground breaking pamphlet ‘How to Have Sex in an Epidemic: One Approach’. It came at a time when American was gripped with panic of the new, little understood, acquired immune deficiency syndrome; AIDS. At the time there were many myths and medical debates circulating about the AIDS, whilst men in the gay communities of what was considered America’s most liberated cities watched their friends diagnosed and then (in the majority of cases in the early 1980s) die of AIDS in a relatively short amount of time. Sex in an Epidemic was groundbreaking as in the melee of all this confusion finally there was a comprehensive guide of how to reduce the risk of developing the seemingly fatal syndrome whilst also enjoying a sex life. 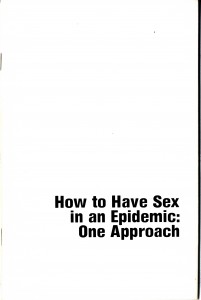 Within the LSHTM archives, alongside the numerous copies of Sex in an Epidemic, are the letters that the publishers – News from the Front Publications- received from the public requesting copies of the pamphlet. The letters can reveal a lot about the audience of the publication. The majority appear to be male, a few doctors, councillors and an occasional female. Unsurprisingly, all most all the letters are from within the USA although there are two individuals writing from England, one from Quebec, Germany, France and one letter from a University in New Zealand!

There are numerous correspondence from American universities requesting a copy of the pamphlet, mostly from states that are traditionally more left-leaning but also one letter from a Texan Community College. This is particularly surprising given that Texas was still trying to prosecute individuals under the anti-sodomy laws as late as 2003 and traditionally was one of the leading states for prosecuting homosexuals. For myself, the most interesting correspondence are those from institutions such as universities and public libraries. Within this particular collection, there are about a dozen surviving requests by public libraries. Given the potentially controversial contents of the pamphlet, this is perhaps surprising that public libraries and community colleges were prepared to purchase, using tax payers’ money, and make freely accessible this pamphlet. 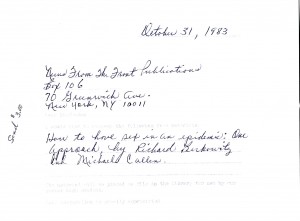 Extract of a received order form for a copy of ‘How to Have Sex in An Epidemic: One Approach’ from a US High School librarian.

Most shocking are the seven letters from American high schools requesting a copy of Sex in an Epidemic for their libraries! Whilst one could debate the intended use of the pamphlet in these schools, one letter explicitly states that ‘The material will be placed on file in the library for the use by our senior high students’. Three letters came from schools within Michigan, which only had its state’s sodomy laws invalidated in 2003 by the Supreme Court. In fact, during the 1980s when these high schools were requesting this literature, Michigan had America’s second harshest penalties for offenders; a maximum of 15 years or the possibility of life for repeat offenders. Another letter is from a Montana high school, a state which even in the early 1990s and again in 2011 was still voting in favour of keeping the anti-sodomy statute.

Numerous questions can be raised in response to these discoveries. For example, were the high schools fully aware of the content of the pamphlet? We will probably never know for sure the answer to this question, but considering that people became aware of the publication through gay communities, publications, groups and through popular media which usually highlighted the connection with homosexuality, it seems unlikely that they could have been ignorant. Furthermore, the named authors of the pamphlet were public gay activities who had previously written about the gay life style of promiscuity.

Another compelling question which we also currently lack the answer to is whether News from the Front Publications actually sent the pamphlets to the high schools. The publishers did produce a standard order form which individuals used to buy the pamphlet. On their order form it does state that ‘I understand that the materials I am ordering contain sexually explicit language which may not be considered suitable for minors [under 18]’. This shows that they were fully aware that the content of the pamphlet was explicit and unsuitable for those under 18. Unfortunately, we have no record of how the publishers responded to such requests.

These letters represent only a small part of the LSHTM’s Sonnabend collection and the wider HIV/AIDS collections that are currently being made accessible to the public by LSHTM. In the foyer of LSHTM there is also an exhibit with more items from the HIV/AIDS collection for those interested in the history of the subject.