Devotion to the cause: addresses by the Director (1924) 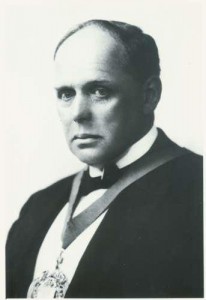 The Library serial collection holds some fascinating publications of the School including journals, bulletins, collected papers, reports and memoir series (dating from between 1899-1988).  These historical publications are soon to join the Library’s other serials (published pre-2010) that are stored in the University of London Library Depository in Egham.  Amongst the titles to be moved is the Collected Addresses and Laboratory Studies (Vol.1-7, 1924-1931) which includes Addresses given by the Director of the School (1923-1931), Sir Andrew Balfour.  This post is a brief introduction to these Addresses (focusing on Vol.1, 1924-5), highlighting some of the main themes and ideas.

Subjects to be studied at the School

The main areas of study (divisions) for the School are to be the nervous system, chemistry and biochemistry, immunology and bacteriology, medical zoology, and epidemiology and statistics. Of particular importance for Balfour is the teaching of biochemistry (essential for diet, vitamins, hygiene), immunology (the health and economic values of vaccines and serums), and bacteriology (for its bearing upon hygiene). Balfour also provides insights into his own education at Edinburgh University with passages describing the ‘unfortunate … mass of dry facts’ that epidemiology was reduced to, and the ‘nearly said wasted’ hours spent on chemical analyses.

Balfour is very clear in emphasizing the practical ends to the research and study of the School.  He states that the School is not to be a ‘mere machine for enabling youths to pass certain examinations or a temple of esoteric study and academic research’.  Instead students are  to go out and experience public health conditions in both the home and working lives of the wider population.  Educational campaigns are stressed as the most important means to promote public health.  The School must train and guide its students so that they can see this wider outlook.

Balfour shows great concern for the ‘most important class of the community – the workers’.  He recognised the necessity of enabling the poor to eat both cheaply and healthily.  Education is required to ‘get the best food value’ and to help eliminate wastage of food.  Balfour is very critical of the excess consumption of the British population post-WW1 (Balfour had served in the Royal Army Medical Corps).  One passage is scathing in its attack on those who ‘by their copious libations wash themselves into graves which they have dug with their own teeth’, the emphasis being on alcohol, an excess of tea and coffee, effervescent liquids, and eating more than was required.  Balfour concludes that although the War ‘should have taught us all a salutary lesson … it has been forgotten’.

In addition to the above Balfour was troubled about the ‘evils’ of certain food preservatives (e.g. being added to milk), and the poor food hygiene that he witnessed – ‘we are a dirty nation in many matters concerned with food handling’.  He points to America as a country that Britain could learn from in this area.

‘I sometimes think it tends to forget its own responsibilities’ was the way Balfour summed up the British Empire’s approach to public health.  Although Balfour was keen to show the good that the British Empire had done, he was all too aware that there was much welfare work left to do.  The British West Indies are described as (from a hygiene point of view) ‘a disgrace to the British flag’, and that the Dutch looked at our efforts in the Far East with ‘pitying contempt’.  Once more education is advocated as a way to improve standards, however Balfour stresses that educators must be people familiar with local customs and beliefs.  Education should be suitable for the local population, free of British ‘dogma’.

Balfour had extensive experience of working in Africa, and many of his addresses on the colonial medical services focus on this country.  Not only does Balfour discuss various diseases, infections and conditions (incl. malaria, yellow fever, sleeping sickness, plague, leprosy, syphilis, dysentery, tuberculosis), but he also goes into great depth describing the local flora and fauna. There are the ‘dangers of a forced descent amongst reeds and water cabbages and hippopotami and crocodiles’, and the ‘vast territory of forest, grass plain, morass and hill ridges’ to cross.  The Victoria Falls are ‘hurtling itself in froth and spume’, while the the peak of Ruwenzori is seen ‘glistening through clouds and mist’.  Balfour’s descriptions have a lyrical quality, rich and highly descriptive.

These addresses reveal an element of Balfour’s personality in a way that the accompanying laboratory studies do not.   Balfour comes across as a man passionate in his advocacy of public health for all.  His style is authoritative and objective, but also reflective.  Balfour engages his audience by reciting verses from poets (incl. Byron and Robert Burns), recalling biblical stories (‘presumably, you know your Leviticus and Deuteronomy’), and referring to writers and philosophers of Ancient Greece (incl. Aristophanes and Hippocrates) and Ancient Rome (incl. Tacitus, Livy, and Cicero).  The breadth and depth of Balfour’s knowledge is impressive and one that he obviously expected his audience to share.

Balfour’s addresses are a fascinating read from both a scientific and historical perspective.  To request these items (or any other serials published pre-2010) and find out more information please visit the Offsite Request Form page.