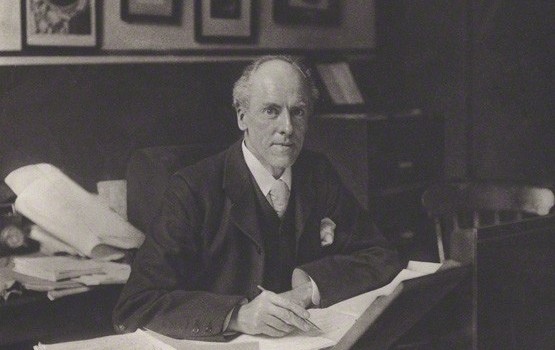 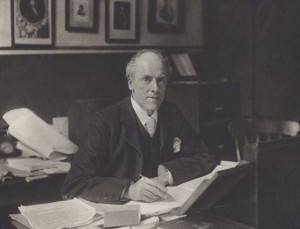 Born on this day 158 years ago, Karl Pearson (1857-1936) is credited with establishing mathematical statistics as a modern academic discipline, helping to develop many of the statistical tools and methods that are still in use today. An enthusiastic student of many subjects, he envisaged a new era of scientific discovery and intellectual cross-pollination. This vision was set out in his manifesto-like book The Grammar of Science (1892, rev. 1900) – an influence on, among others, the young Einstein – in which he wrote that ‘the mathematician carried along on his flood of symbols, dealing apparently with purely formal truths, may still reach results of endless importance for our description of the physical universe’. Scientific knowledge, Pearson noted, was responsible for mankind’s increasing control over other forms of organic life, ‘from the brute power of the wild beast to the subtle power of the microscopic bacillus of some dread disease’. 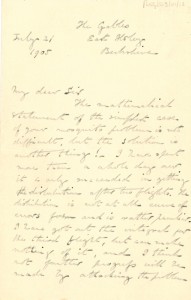 Dread diseases were the province of epidemiology, a field that was slow to adopt Pearson’s new statistical methods, perhaps partly because of his association with Francis Galton and the controversial subject of eugenics (in which he would become the first Galton Chair at University College London in 1911). As Anne Hardy and Eileen Magnello note, Pearson ‘raised hackles among the medical community’ by expounding views that implicitly ‘condemned the past 60 years of public health effort as contributing to the deterioration of the British race’. Still, there were independent researchers who saw the possibilities for statistical approaches to medical questions, and they looked to Pearson for assistance.

The LSHTM Archives can shed light on one particular episode in this history, namely Pearson’s correspondence with Sir Ronald Ross. Having already won the 1902 Nobel Prize for his discovery of the mosquito transmission of malaria, Ross was experimenting with a mathematical model of mosquito movement patterns, in the hope it could be used to predict their population density in a malaria-infected area. Unsatisfied with his initial results, he wrote to Pearson in July 1904, asking for his input. Pearson expressed a mild interest, but complained that he was too busy to help: ‘the last year we have had such a mass of external work sent in to us for advice or assistance, that it has very much interfered with the ordinary work of my assistants & myself’.

Their correspondence resumed a year later in 1905, and this time Pearson was more forthcoming:

The mathematical statement of the simplest case of your mosquito problem is not difficult, but the solution is another thing! I have spent more than a whole day over it & only succeeded in getting the distribution after two flights… It is, I fear, beyond my powers of analysis & wants a strong mathematical analyst. If you set such men the thing as a mosquito problem, however, they will not look at it. I must restate it as a chessboard problem or something of that sort in order to get mathematicians to work at it!

Pearson wrote a letter to Nature, entitled ‘The Problem of the Random Walk’, appealing for suggestions. Sure enough, the flying mosquito had become a walking man, and there was no mention of Ross. This very letter, and the interest it provoked, led to the canonisation of the term ‘random walk’, which is used to this day in statistics to refer to a mathematical formalisation of a series of random steps. It is also sometimes known as the ‘drunkard’s walk’, because of Pearson’s follow-up remark in Nature: ‘The lesson of Lord Rayleigh’s solution is that in open country the most probable place to find a drunken man who is at all capable of keeping on his feet is somewhere near his starting point!’

The rather jealous-minded Ross seems to have regarded Pearson as having stolen his idea without due acknowledgement: his copy of Pearson’s extended 1906 article on ‘A Mathematical Theory of Random Migration’ is annotated with indignant reminders, clearly written with a view to the historical record, that his own work had pre-empted Pearson’s. However, they were addressing different audiences: as Pearson had noted, mathematicians had no particular interest in mosquitoes, just as the medical community was largely unconcerned with the finer points of statistics. It would take a new generation of medical statisticians, such as Pearson’s former student Major Greenwood (1880-1949) – who presided over what would later become the department of Medical Statistics at the LSHTM – to help synthesise research in the two fields.

To read over these historical documents is to be reminded of quite how recently statistics emerged as an established discipline, both on its own and as a tool for other branches of science. The pioneering researches of Pearson (and Ross, and others) remain an important part of its story.

For more information or to see these original document, please contact the LSHTM Archives at: archives@lshtm.ac.uk