It would be amiss for us not to write about some of the exotic titles in the Library and Archive Service’s Rare Book collection. Many of these unique works need care and conservation to restore them to their original condition. In our quest to highlight our special collections, we are presenting William Balfour’s colourful ‘Observations on adhesion with two cases’, a 19th century publication that showcases the author’s belief in the body’s natural capacity to bind and heal flesh after accidents involving minor amputations. 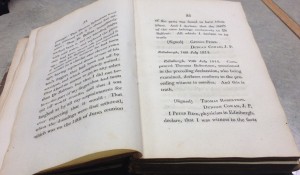 First published in the Edinburgh Medical and Surgical Journal, ‘Observations on Adhesion…’ was published to show “the powers of nature to reunite parts which have been, by accident, totally separated from the animal system.” By first noting that the capacity of trees to absorb wood through grafting, he surprised his colleagues by replicating this process in humans. Thus, he proved that small separated body parts receiving no circulation at all could be reunited with the body as long as this happened in a timely manner. In order to convince sceptics, he presented two case studies, one involving his son, who had three fingers accidentally sliced off in the slamming of a door, and the other on the carpenter, George Pedie, who lost a thumb to a botched hatchet-blow at work.

In both cases, Balfour stuck finger to hand, bandaged it, and low and behold, adhesion of finger and hand took place quickly. In the case of George Pedie, it only took two days. In anticipation of a sceptical response from his colleagues, Pedie provided a witness statement in support of this work:

“I had no reason to go to any other than Dr Balfour; but that I did not believe the part of my finger that had been cut off would reunite, and that I was laughed at by all my acquaintances for ever expecting that it would…That when the dressings were first removed…reunion of the parts was found to have taken place.”(George Pedie, house-carpenter)

Written in English, ‘Observations on adhesion […]’ forms the first section of a book that also contains nine medical dissertations written in Latin and presented to the Edinburgh Royal Medical Society from 1810-1814.