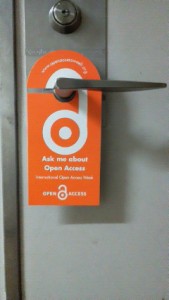 Open Access Week is now in its eighth year offering the opportunity to celebrate our achievements so far, and further promote awareness to help make Open Access the new norm in research worldwide.

Exemplifying some of the achievements at The London School of Hygiene & Tropical Medicine, the institutional repository Research Online, has proven to be a great benefit to School researchers in open access publishing. Since 2011, content in Research Online has received over 1,012,493 downloads. In 2015 alone, there has been over 630,000 items downloaded. Research Online is a rich resource containing a diverse range of LSHTM research such as journal articles, book chapters, reports, conference papers, podcasts and videos.

In the last 12 months, we have been working hard on promoting Open Access initiatives within the School including advice on the new Open Access requirements for the HEFCE Research Excellence Framework 2020. During this year’s Open Access Week, we also included 1-to-1 sessions to give researchers a chance to get to grips with what Open Access options they have and the benefits of Open Access to the impact of their research.

As Open Access Week has come to a close, I thought it would be a great to ask a few members of both the library, research data team and faculty what their views are of Open Access today. First up is Antonio Gasparrini, Senior Lecturer in Biostatistics and Epidemiology.

Can you tell us a bit about your role at the London School of Hygiene & Tropical Medicine?

I have been at LSHTM for longer than 8 years now, working in various departments and faculties as well as in various research projects. I am currently Senior Lecturer in Biostatistics and Epidemiology in the Department of Social and Environmental Health Research, Faculty of Public Health and Policy. My main research interests are about the development of statistical methods and study designs in epidemiological and public health research, with a focus on environmental epidemiology.

Can you explain why the Open Access initiative is important?

These initiatives can help inform researchers in the academic community, and more broadly within society, about the importance of Open Access. In my opinion, there is only a superficial understanding, even among academics actively involved in research, about the issues surrounding the current framework of peer-reviewed publishing and the need of open access scientific contents.

Do you support the premise that Open Access initiatives will lead to an increase in public understanding of scientific research? Why?

Absolutely. I think that the most important aspect of making every research output publicly available is about extending the discussion on scientific developments beyond the ivory tower of academic audience. Open Access contributes establish a framework between researchers, other actors such as public or private research centres or charities, and the general public.

What role do you think academic libraries can take in supporting researchers in the understanding and use of Open Access publishing?

Academic libraries play an important role, especially in this period of transition between the old model of research publishing and the new framework, actually not yet completely defined. Researchers have usually a limited knowledge of the practical issues of peer-reviewed publishing and access to scientific contents. Libraries can act as a filter between the academic community and the other actors involved, including funders, publishers and the community. For instance, the Library at the School has provided me support and information regarding many technical issues about the open access in my recent work.

Many funders are now requiring researchers to publish papers under a CC-BY license which permits commercial reuse. Can you see why researchers might be uncomfortable with the idea of their work being ‘sold on’?

I admit, as a researcher, that there is the tendency of considering our scientific work as proprietary. Researchers instinctively resist the idea of sharing potentially good ideas before they have exploited them, and this issue is exacerbated in the competing environment of research funding allocation. We should be reminded more often that we are paid by the community for the research we produce, either directly through higher education funding or indirectly through research grants. Making our work Open Access is an obligation, not a choice.

Our next blog will feature an interview with Gareth Knight, Research Data Manager.