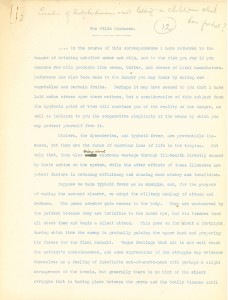 Extract from Balfour Kirk’s letter to his godson Robin, 1925

To celebrate World Toilet Day we thought it would be appropriate to quickly highlight one of our archival manuscripts on sanitary care in the tropics. Written by Dr James Balfour-Kirk to his godson who was travelling through the tropics with his family in 1925, Kirk provides a candid point by point guide to surviving in the tropics including chapters on personal hygiene, keeping cool, rest and disease and the disposal of excreta. It is the latter that it seems appropriate to dwell on with Balfour-Kirk describing the ‘Filth Diseases’ such as ‘Cholera, the dysenteries and typhoid fever, [as] preventable diseases, yet they are the cause of enormous loss of life in the tropics’. He elaborates by adopting a military analogy to describe the course of typhoid: how it lurks in silence in the tissues before composing itself for a final assault leading to a ‘Battle Royal’ that leaves the victim physically prostrate and persists for several weeks followed by a long period of convalescence, or the ‘post-war reconstruction period’, which Balfour-Kirk describes as a “bloody waste of time”.

He apologetically explains that filth diseases can only be contracted by eating and drinking “infected excrement within a comparatively short time after it has been voided by a patient or a carrier of the disease”. He admonishes himself for the “brutally crude” way of expressing himself before outlying the universal soil pollution that persists in the tropics where human excrement is used for fertilizer and water supplies are easily contaminated and everything is exacerbated by domestic flies (they have their own chapter). 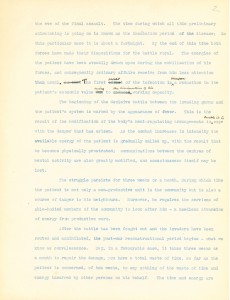 Extract from Balfour Kirk’s letter to his godson Robin, 1925

The only solution is to boil all water to be used and cook all your food thoroughly. He adds finally that you shouldn’t forget to boil your ‘tooth water’ e.g. water for brushing your teeth. Make sure the house boy is not the “lazy type” and provides clean water by testing him, by adding a few drops of eau-de-Cologne in the toilet water jug in the morning and seeing if it smells of cologne in the evening. If it doesn’t, Balfour-Kirk suggests you may “have up” the “house-boy as the occasion and the custom of the country permits’.

Whilst, the manuscript is very much a product of the colonial era, the persistence of water-borne infections and the importance of functioning latrines is still as relevant today as it was then.