The LSHTM archives holds the papers of Professor Baron Peter Piot, the School’s Director, these reflect his career in fighting epidemic disease not only through his epidemiological work on the Ebola virus and HIV/AIDS but also his role as Executive-Director of UNAIDS (1995-2008). 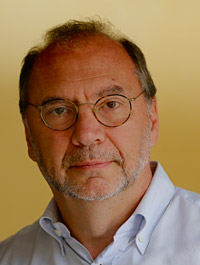 Baron Professor Peter Karcl Piot, was born on the 17th February 1949 in Louvain, Belgium. He studied medicine at the University of Ghent (achieving his M.D. in 1974) and after graduation moved to the Institute of Tropical Medicine, Antwerp, to work under Dr S. R. Pattyn. In 1976, he and his colleague, Guido van der Groen, were chosen from the School to join the WHO International Commission investigating the then unknown Ebola virus in Zaire (now Democratic Republic of Congo), having been part of the team that had isolated the virus.

In 1980 he received his PhD in microbiology and became Associate Professor of Microbiology and Head of the Division of Microbiology at the Institute. Based in Antwerp, he set up a number of international projects in Africa chiefly looking at the spread of the HIV/AIDS on the continent. In 1983, he helped establish the international project based in Kinshasa, known as Projet SIDA that was the initial source of epidemiological work on HIV/AIDS in Africa. Between 1986-1987 he became an Associate Professor, Department of Medical Microbiology at the University of Nairobi, Kenya.

The following year, he became chair of the Steering Committee on Epidemiology and Surveillance of WHO’s Global Programme on AIDS. In 1991 he was elected President of the International AIDS Society and then left his position in Antwerp to move to Geneva to become an Associate Director of the Global Programme on AIDS, World Health Organisation. In 1995, he was elected Executive-Director of the Joint United Nations Programme on HIV/AIDS (UNAIDS) and served in this position for thirteen years before leaving in 2008 to become Professor of Global Health, Imperial College London. In 2010, he was appointed Director of the London School of Hygiene and Tropical Medicine. 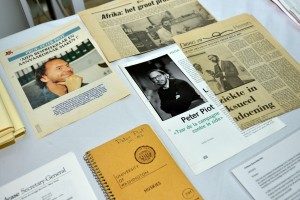 Material from the Piot collection

The papers held at the School reflect his career in fighting disease with fieldwork based on his epidemiological work on the Ebola virus and HIV/AIDS in Kinshasa. Correspondence files from his time as Professor of Microbiology in Antwerp provide an insight on the international network of medical experts working on the AIDS pandemic in the 1980’s with conference papers on notable meetings such as the first African meeting on AIDS in Bangui, 1985.

The majority of the papers in the collection relate to his tenure of Executive-Director of UNAIDS. The papers incorporate material relating to the establishment and governance of the organisation and also the working life of the Executive-Director through his speeches; correspondence; conferences; meeting notes; travel documents and also hold a rich source of working papers on significant developments in his tenure such as the South African AIDS epidemic; the formation of the Global Fund against AIDS, Tuberculosis and Malaria and the United States President’s Emergency Plan for AIDS Relief (PEPFAR). Papers also include collected articles, newspaper articles and reports relating to Piot’s career and various topics relating to the global strategy for the prevention of HIV/AIDS.

The collection can be viewed by appointment by contacting the archive service by email at the following address: archives@lshtm.ac.uk.