CYRIL CUTHBERT BARNARD (1894-1959), LIBRARIAN, AND THE WEDGWOOD POTTERY CONNECTION
Cyril Barnard was the LSHTM’s first Librarian serving the School from 1921-1959, a time when having a job for life was usual : he was still in post when he was sadly killed in a road accident 6 months before he was due to retire. 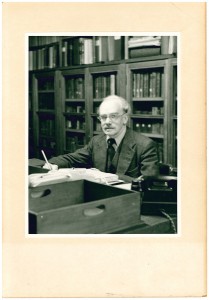 Being the first Librarian meant Barnard had a hand in the design of the Library accommodation when the School moved to new premises in Keppel Street in 1929 : it has changed little since then. Barnard had the responsibility for selecting and acquiring the book and journal collections in tropical medicine and related subjects, and all the services necessary for running the Library. As the number of books increased, Barnard took the initiative and devised a unique classification by which to organise the stock. It was published as A classification for medical libraries in 1936, followed by a second edition in 1955 to take account of new subjects taught by the School : testament to its practical organisation of knowledge is the fact it is still in use today, and is known as the Barnard classification. During Barnard’s tenure of the School Library several grand national library projects were started, and Barnard served on the committees of some of them. For example, he set up the Medical Library Group of the Library Association in 1947.
Barnard’s connection to the famous Wedgwood pottery came through his father, Harry Barnard (1862-1933) who was employed by the company variously as designer, modeller, painter and artist. After studying art Harry Barnard joined Doulton & Co, porcelain manufacturers, and worked for them from c1880-1895. In about 1897 he joined Josiah Wedgwood, creating porcelain pieces before moving to London in 1902 as the company’s sales manager. In 1919 he returned to the factory to develop a Museum to showcase the firm’s history, and was also delivering lectures, and writing books on it.
In 2009 the Wedgwood Museum was in danger of being sold off. A massive fund-raising campaign to save this quintessential British institution was launched and, in 2014 the Museum and its 80,000 objects had been saved for the nation : doubtless, some of these artefacts were the work of Harry Barnard, father of Cyril Barnard.
http://www.wedgwoodmuseum.org.uk/learning/discovery_packs/pack/working-at-wedgwood/chapter/harry-barnard-1862-1933