75 Years Ago Today: LSHTM & the Blitz 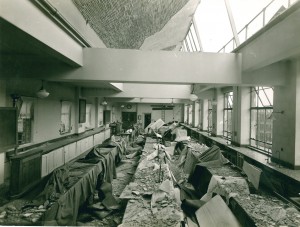 Bomb damage to the Dept. of Parasitology on the 3rd floor.

75 years ago today, on Saturday, 10th  May, 1941, the London School of Hygiene & Tropical Medicine was bombed. Fortunately, as the bomb struck at 10.45pm, only four people – G.S Parkinson, K. M. Shaw, W. Gurr and W. Farr – were present and all escaped unscathed. Unfortunately, the same could not be said for the School. It is estimated that a sixth of the School building was damaged, from the effects of the bomb and its resulting fire; a fire that was not put out until the morning due to lack of available firemen.

The basement of the Malet Street wing, and the departments of Applied Physiology, Chemistry, Parasitology and Public Health were destroyed. More devastating news hit the School’s Museum, who in hope of protecting their most valuable objects from the Blitz, had stored them in the basement – ironically this is where the most damage occurred and had the objects remained in the Museum they would have been saved. 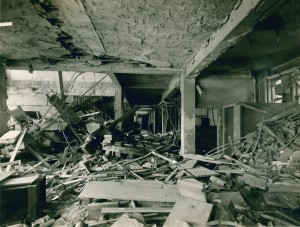 Although devastating, the School embraced the ‘Blitz Spirit’ and continued with its teachings. By the Monday the School was open again and teaching the short course for medical officers, even though the School was offered teaching space with Cambridge University, it was decided to remain in Keppel Street.

The bomb also led to a member of staff, Katherine Shaw, receiving an MBE for her ‘courageous behaviour and presence of mind’[1] during the explosion. Shaw joined the School in 1929 as the first personal assistant to the Professor of Public Health, Sir Wilson Jameson, and was then made the personal assistant of Sir Andrew Balfour, the first director of the School. Shaw also worked alongside, Major Greenwood and Professor Leiper. Shaw remained at the School until 1964 after thirty-five years of service at the School.

It took seven years to restore the School back to its pre-war state, however this did not stop the School from teaching during the war years and resume its full courses in 1945. 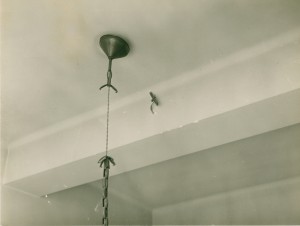 A pair of calipers, which were blown from the basement during the explosion, embedded in a ceiling.