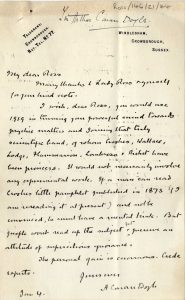 Spiritualism garnered popularity throughout the 19th and early 20th century, having emerged from America in 1848 when sisters, Maggie and Kate Fox, claimed that they were able to speak to spirits whereby they deciphered the knocks, apparently, created by other worldly visitors. Their claims led them on a tour of the United States, which led to the emergence of new mediums and Spiritualists throughout the country. The popularity of Spiritualism was not confined to the United States; in 1853 the UK’s first Spiritualist church opened in Yorkshire and the first national Spiritualist meeting was held in 1890. By the 1930s, the UK had an estimated 250,000 practising spiritualists, proving that Spiritualism had captured the imagination of many throughout the world. 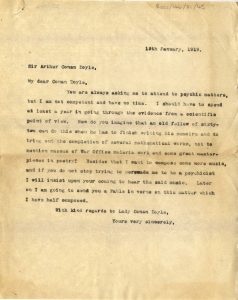 Spiritualism captivated the imaginations of prominent figures such as physicist Sir Oliver Lodge, chemist Sir William Crookes, and author Sir Arthur Conan Doyle. In his letter to Sir Ronald Ross in 1919 (GB 0809 Ross/146/21/44), Sir Arthur Conan Doyle implored Ross to turn his, ‘powerful mind towards psychic matters’ and argued that those who were still sceptical, even after reading the seemingly convincing pamphlet on spiritualism by Crookes, ‘must have a mental kink’. Ross did not share the Conan Doyle’s beliefs, in response to his letter, Ross politely stated that he was far too busy to study ‘psychic phenomena’ (GB 0809 Ross/146/21/45).seancesseance

However, Ross did not hold back when he reviewed the ‘Ghost-Hypothesis: on spirit experiences’ by Charles A Mercier (GB 0809 Ross/132/59), where he questioned spirits inability to hold a conversation, ‘when they speak why do they not say something great or useful?’ or communicate during daylight hours, ‘If only these ghosts would come out and have a plain talk with us on a sunny day in an open field, or say in Hyde Park, what a lot of trouble would be saved?’. Sir Ronald Ross was also perturbed with the idea that spirits were able to wear clothes and hold inanimate objects: 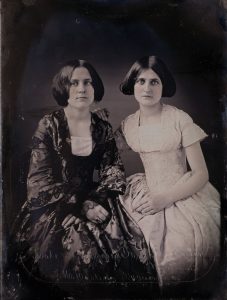 ‘Very few of our acquaintances claim to have seen ghosts; but we have read of ghosts who wore winding sheets, chain-mail, or bob-wigs, and who carried daggers, swords, pistols, candles, and bleeding hearts…If we believe these stories, then we must believe , not only in ghosts of the human form, but also in ghosts of linen, hair, iron and tallow…If we refuse to accept this deduction , we must believe only in naked ghosts’.

Rather than enter an existential crisis, Ross concluded that spiritualism and spiritualists’, ‘believe in it because they wish to believe in it; they invent evidence and pervert argument in order to convince themselves; and maintain that it is true because it is pleasant’. Ross’ hypothesis may be true considering the Fox Sisters admitted in 1888 that their ability to communicate with spirits in a form of ghost Morse code was all but a hoax…