During our regular tours of the building, we point out the various artworks which are on display around the Keppel Street building. In 2000, the School established a contemporary art programme. The initial idea was to commission or purchase some sculptures and pictures, but the building has relatively few suitable spaces for placing or hanging art. So instead the emphasis shifted towards commissioning works that fitted, both in terms of the themes of the school and the architecture of the building. There are now various major pieces installed in the main building. 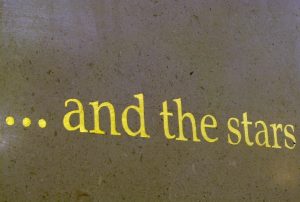 In ‘bad air’ [mal´aria], Susan Brind entwines language and architecture in a complex work touching on the history of LSHTM, the disease of malaria itself and the doctor and patients who wrote about it and suffered from it. It is an installation inscribed in gold leaf lettering on the terrazzo surfaces around the quadrant of the Keppel Street building. The texts are drawn from a number of sources, ranging from the classical period to the twentieth century. They draw upon beliefs that prevailed in Britain until the Victorian era, when ideas about miasma (noxious vapours and foreboding atmospheres) were replaced by scientific knowledge about bacteria, the causes of diseases and forms of pollution. The texts draw particularly on the 19th C accounts of malaria induced delirium and recovery, described by the explorer Sir Richard Burton. This artwork can be seen on the ground floor of the building. 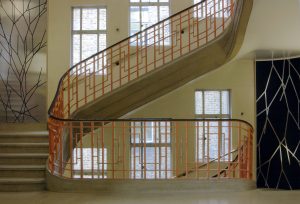 Ramifications by Martina Kramer is inspired by the School’s beautiful Bloomsbury building and the School’s research. Kramer selected a space of movement and transit for her work: the stairwell in the main part of the building is its site and inspiration. Ramifications is the title of two complementary series of drawings that continue through the floors. At first an organic or crystalline growth is suggested by the paintings, which draw on fractal geometry, an irregular whole built up from regular and symmetric basic forms. Kramer recognises this as a pattern that many researchers at the LSHTM may be familiar with but she has also conceived this work to reflect, both literally and metaphorically, the vertical movement of the people using the stairs. 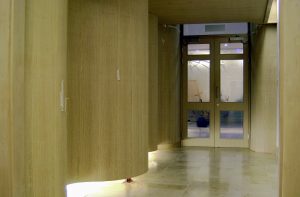 Untitled by Grenville Davey was conceived to reflect the maritime origins of tropical medicine, and the School’s early history, which was inextricably linked with seafaring. In the papers and correspondence which passed between the architect and the client at the time the original building was constructed, there are numerous references to maritime architecture and plenty of nautical touches to be found in the original building design. The artist’s aim is to reflect this theme in the wave wall, using oak veneer for both the wall and the ceiling. The artist,  Grenville Davey won the Turner Prize in 1992 for his artwork entitled HAL.