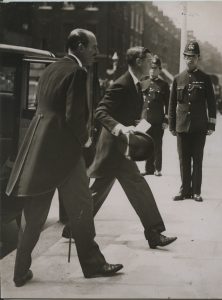 Prince of Wales outside the School

The School was officially opened by HRH The Prince of Wales (who went onto become Edward 8th who abdicated), on 18th July 1929 at 12pm. On arrival he was welcomed by the Chairman of the Board of Management, Lord Melchett; Chairman of the Court of Governors, Sir Holburt Waring; and the Vice-Chancellor of the University of London, Sir Gregory Foster. The Prince was presented to the Architects, Morley Horder and Verner Rees who offered him the key to the building, the Archives has the box in which the key was presented, this is currently on display in the Manson foyer. The Prince did not need to use the key and it is believed that he put it in his pocket.

In the Entrance Hall the Prince was presented to more senior staff and then taken up to the Library where he gave a speech in which he formally declared the building open. At this point, the main doors of the building were opened and a fanfare sounded by the trumpeters of the Coldstream Guards. 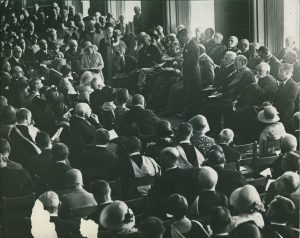 HRH Prince of Wales giving a speech in the Library

Here is an extract of part of his speech:

‘You have cause to be proud of this magnificent building, and if the laboratories, museum, and lecture theatre make good the promise of this library, I think you are indeed to be congratulated, and the building will be a notable addition to the homes of learning in London. Reference has been made to the part played by America and the duty which lies on both the British Government and the British people to see that the School is worthily endowed and maintained. The building is a sign that post-graduate education in medicine is about to come into its own. The establishment and endowment of this centre of teaching in preventive medicine is a signal example of the bond between the two great English speaking races of the world. The Chairman has rightly said that there are not territorial frontiers in hygiene. The instruction in the classroom and laboratories of this building will be conveyed by medical practitioners of every nationality to the far corners of the earth. This research will find its results wherever man lives and moves and has his being.’

The Prince was then taken on a tour of the building, the Archives has a note of his route in a document for stewards which was as follows: 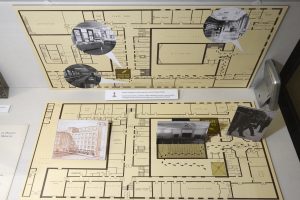 On leaving the library he will ascend by the lift to the third floor and enter the museum. Turning to the right, going round the Tropical Medicine Museum, he will leave by the door entering the Medical Zoology Laboratory. Traversing the cross corridor and descending the Gower Street staircase to the second floor, go through Professor Topley’s laboratory and then through the General Hygiene Museum, take lift to ground floor. Then enter lecture theatre, and after visiting the workmen’s tent, return same way, leaving by main entrance.

The Archives Service recreated this route on a plan of the School which is currently on display in the Manson foyer. The Prince left the building at 12.50pm.

Lunch was served to the guests at 1pm, after which guests were shown around the building by staff and short cinematograph displays were given in the Lecture theatre

The Archives holds records and correspondence relating to the opening ceremony and a letter was found from Sir Ronald Ross. He was the discoverer of the mosquito transmission of malaria and the first Briton to be awarded the Nobel Prize for Medicine. He never worked at the School, working instead at the Liverpool School of Tropical Medicine. However he had worked with many of the London School’s staff or was acquainted with them through his work, and the Ross Institute and Hospital for Tropical Diseases was incorporated into the School in 1934, two years after his death.

He wrote an amusing letter on 20th July 1929, two days after the ceremony to Sir Andrew Balfour, Director of the School in which he states: 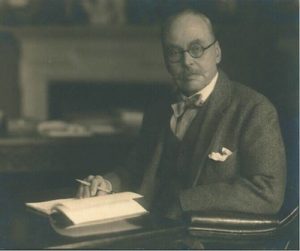 ‘I had every comfort on the occasion of your opening ceremony, and found a lovely luncheon room to ourselves, where Miss Lafford ate too much. She has been grumpy ever since. (Not true, Sir Ronald bagged my fruit). There was only one defect in your ceremony, namely that all of us at our end of the room could not hear what was said. This was due to the arrangement of the seats. The platform should have been at the end of the room instead of half way along, which is a mistake often made. On these occasions I often drop loud words and fear that the Prince may have thought that a bomb was going off. But as for lunch – it was perfect. 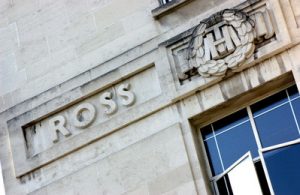 Name of Sir Ronald Ross on the frieze

PS Some people are pitching into you for not putting my name outside your new building, but I always explain that this is a pleasure awaiting you when I am dead!,

There was a response from Balfour which says:

‘Many thanks for your amusing note. I am glad to find you in such good spirits. I am afraid the wiseacres who have been miscalling me must have very slight historical knowledge, and I am glad that you have corrected them. Your space is there but I hope it may be a long time before it is necessary to fill it!

PS I am sorry you could not hear but I am afraid that, if the platform had been at one end of the room, the Library acoustics are such that even more people would have been debarred in an auditory sense. The trouble is that our lecture theatre can only hold 270 and we had, as you know, something between 500 and 600 present.’

For more information on the building or the opening ceremony, please contact the Archives Service at: archives@lshtm.ac.uk