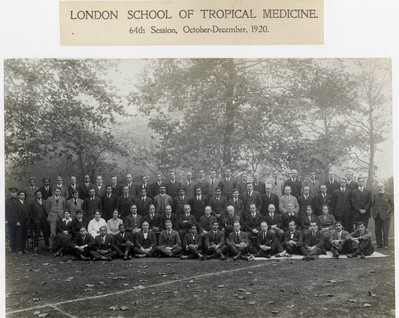 As we welcome new students to the London School of Hygiene & Tropical Medicine, it seems appropriate that we reflect on the students who attended 100 years ago, the class of 1920.

The 64th session ran from October to December. 72 students attended the School, of these 61 were men and 11 were women. They came from the following services:

The School’s student registers record a number of details about the students including their destination on leaving, the majority of students went to India (24), and the next most popular destination was Africa (10) but students ended up all over the world including China, West Indies and South America.

The students were taught in Endsleigh Gardens, this was a former hotel that was converted to a hospital for officers during the First World War. This building is still standing in Gordon Street and is now the student union for University College London. The School moved from its original home in the Albert Docks in early 1920, although the building wasn’t officially opened until November 1920. The School remained here until 1929 when we moved to the Keppel Street site.

There was a link with Keppel Street as some of the students lived in the Indian YMCA which was on the Keppel Street site. In August 1916 a wooden mock-Tudor YMCA Hut opened on the corner of Keppel and Gower Street in London’s Bloomsbury.  “The Shakespeare Hut” as it was called became a home from home for predominantly Anzac soldiers on leave from the Front and remained so until 1919 when it briefly housed  the Indian YMCA before it was pulled down in 1920s to make way eventually for the London School of Hygiene & Tropical Medicine which still occupies this site today.

Among the students there was at least one individual who went on to work for the School and for whom we hold archival material.

Patrick Alfred Buxton, born 1892, educated at Trinity College, Cambridge. While at Cambridge, Walter Fletcher encouraged Buxton’s studies in the Natural Sciences Tripos. During the Great War he qualified in medicine at St George’s, and then spent his time in the Royal Army Medical Corps collecting insects in Mesopotamia and Persia. During the 1920s he gradually equipped himself for his future role as an eminent medical entomologist, working in Cambridge, London and abroad. From 1923-1925 he led an expedition to Samoa, New Hebrides and the Western Pacific Islands.

For further information on the material featured in this blog, please contact archives@lshtm.ac.uk