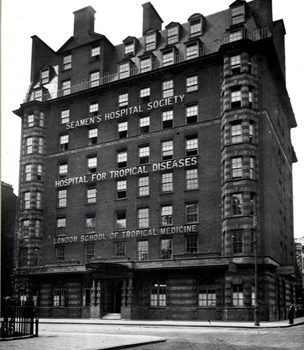 Today, 11th November 2020, marks the 100th anniversary of the official opening of the London School of Tropical Medicine and Hospital for Tropical Diseases in Endsleigh Gardens by HRH The Duke of York.

At the end of 1918, Sir Havelock Charles, Dean of the London School of Tropical Medicine (as the School was then called), made the decision that the School would move from the Albert Dock Hospital in the East End into Central London. The School had largely outgrown its premises and there was concern that as a result of the end of the First World War there would be an increase in patients returning to Britain suffering from tropical diseases. There was also a general desire to be closer to, and enhance the School’s standing with, the University of London.

The building was a former hotel, the Endsleigh Palace Hotel, which had been used as an army hospital for officers during the First World War and was suitably equipped to house both the Hospital for Tropical Diseases and the School. It also had the added benefit of being located close to the proposed new site of the University of London and the Wellcome Institute.

The move was made possible by a donation from the Royal Red Cross Society who at the end of the war found itself with a substantial credit balance from funds collected during the war years. It was decided to devote some of this for the benefit of ex-servicemen who had suffered from tropical diseases, so that a grant of £100,000 was made to the Seamen’s Hospital Society.  Lord Milner at the Colonial Office raised another £80,000 and by Feb 1920 the former Endsleigh Garden Hotel had been refurbished. Staff and students moved in early 1920 but it wasn’t officially opened until November.

The nine storey building was suitable to house both School and hospital, the lower four were devoted to the School and the upper to the Hospital for Tropical Diseases. The ground floor housed a lecture room, library (shown on the left), board room, refectory and offices, on the first floor were the museum and departments of tropical pathology and entomology, on the second floor helminthology and protozoology and on the third floor the Tropical Diseases Bureau.

It was estimated that the hospital should accommodate sixty beds. There were two public wards of fair size, and numerous smaller ones for 2-4 beds and there was one floor mainly of single rooms for private cases. The surgical block was at the top of the building and the X-ray department was in the basement.

The Hospital for Tropical Diseases was at first fully occupied by pensioners of the First World War. They flocked there with malaria, amoebic and bacillary dysentery, liver abscess, kala azar, trypanosomiasis and other tropical diseases. There was an abundance of tropical cases for the students to study. The first case admitted to hospital in Feb 1920 was one of bilharziasis in an ex-serviceman from Egypt which was regarded as a good omen for the future.

An account from a former staff member said that the building was dark, awkward, and inconvenient, with multitudes of doors and narrow passages. The lecture was dingy, dusty, dirty and noisy where it impinged upon Gordon Street and with the bustle of the traffic outside it was difficult to be heard. There are stories about students falling asleep in the lecture theatre as it was so dark. The staff and students must have been very happy with the new facilities of the Keppel Street building when then moved there in 1929.

The Endsleigh Gardens building is still standing in Gordon Street and is now the student union for University College London, there is a blue plaque on the wall to commemorate its history.