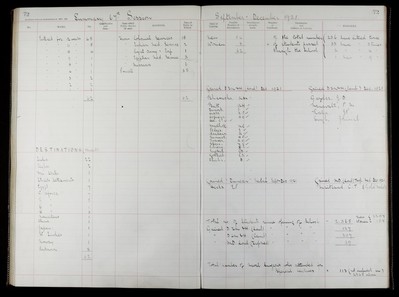 As we welcome new students to the London School of Hygiene & Tropical Medicine, it seems appropriate that we reflect on the students who attended 100 years ago, the class of 1921. Unfortunately, we do not have a photo of this session which we do for some other years.

The 67th session ran from September to December. In 1921, there were three sessions a year. 62 students attended the School, of these 54 were men and 8 were women. They came from the following services:

The School’s student registers record a number of details about the students including their destination on leaving, the majority of students went to India (22), and the next most popular destinations were Egypt (7), West Africa (7) and East Africa but students ended up all over the world including China, Japan, West Indies Norway.

As is shown, many of the students came from the Colonial Service and went onto work in British Colonies. LSHTM is currently researching its colonial origins and the legacy of our past on our current staff and students. Find out more about the LSHTM and Colonialism research project.

The LSHTM Archives Service has begun to re-examine the collections we hold, the stories we tell and the role we can play in critically engaging with the School’s colonial legacy. We have developed a set of principles for decolonising the archive which we are incorporating into our daily working practice.

This page in the student’s register gives a summary of the year but also includes the total number of students that had attended the School since it opened in 1899: 2365. 2207 of these were men and 158 women.

The students were taught in Endsleigh Gardens, this was a former hotel that was converted to a hospital for officers during the First World War. This building is still standing in Gordon Street and is now the student union for University College London. The School moved from its original home in the Albert Docks in early 1920, although the building wasn’t officially opened until November 1920. The School remained here until 1929 when we moved to the Keppel Street site.

There was a link with Keppel Street as three of the students lived in the Indian YMCA which was on the Keppel Street site. In August 1916 a wooden mock-Tudor YMCA Hut opened on the corner of Keppel and Gower Street in London’s Bloomsbury.  “The Shakespeare Hut” as it was called became a home from home for predominantly Anzac soldiers on leave from the Front and remained so until 1919 when it briefly housed  the Indian YMCA before it was pulled down in 1920s to make way eventually for the London School of Hygiene & Tropical Medicine which still occupies this site today.

For further information on the material featured in this blog, please contact archives@lshtm.ac.uk