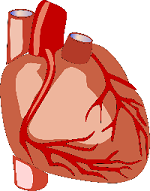 Vascular disease includes diseases of the arteries, veins, and lymphatic system. It is very common but often not fully understood or known about by the general public.

“It accounts for 40% of deaths in the UK, many of which are preventable.” (Circulation Foundation).

Although there are many causes of vascular disease it is commonly caused by weakness in the vessels and a build-up of fatty deposits known as atherosclerosis which impedes the blood flow. Some lifestyle factors that can increase risk are smoking, diabetes, poor diet, lack of exercise, and stress. Vascular disease often leads to coronary heart disease, heart attacks and strokes.

The library provides access to some electronic journals on vascular disease:

You can search for library resources using the library’s search tool, Discover.

A small selection of books and pamphlets on vascular diseases and related subjects are on display in the Library’s Reading Room.