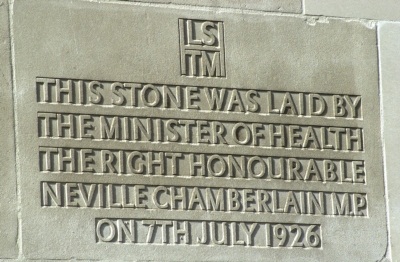 Laying of the foundation stone at Keppel Street 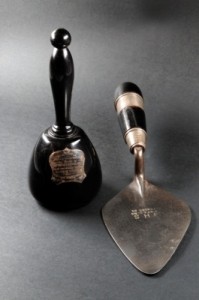 Today, the London School of Tropical Medicine, marks the 89th year the school’s Foundation Stone was laid, using a custom made mallet and trowel, by future Prime Minister Neville Chamberlain. It would be another three years until the school was officially opened by the H.R.H Prince of Wales on the 18th of July 1929.

In 1926, the year of the laying of the Foundation Stone, Neville Chamberlain was the Minister of Health, which, at first glance, was an obvious choice for the university, yet it was Neville’s father, Joseph Chamberlain, who played a noteworthy role in founding the School in 1899, by supporting and providing grants to help it to establish. By 1926, the LSHTM had secured financial support from the Rockefeller Foundation in the amount of two million dollars for the building and equipment of the new school in Keppel Street. It was this support that Neville Chamberlain celebrated during his speech, proclaiming:

Other notable guests attended the ceremony, including: Professor Leiper Director of the Department of Parasitology at the LSHTM; Dr and Mrs Manson-Bahr , Sir Patrick Manson’s daughter and son-in-law; and Dr Andrew Balfour who was director of LSHTM at this time. 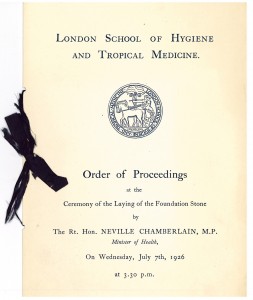 Timings for the ceremony

Later, guests were invited for tea and a luncheon was held in honour of the laying of the foundation stone, where guests enjoyed a French inspired five course meal at the Carlton Hotel. You can view the ‘Order of Ceremony’, the luncheon menu, the ceremony seat plan, and the mallet and trowel Neville Chamberlain used to lay the foundation stone at the LSHTM archives. 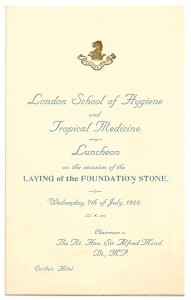