Christmas in Uganda 1922: The Carpenter Diary

The Archives team is looking forward to Christmas and what better way to celebrate than to look at a few of our festive collections. Below are four extracts from the Carpenter travel diary, documenting Geoffrey and Amy Carpenter’s Christmas spent in Uganda in 1922.

But first who were the Carpenter’s? Geoffrey Hale Carpenter was a student at the School in 1910, he became the specialist officer for the control of sleeping sickness in Uganda in 1920. This diary was written jointly by Carpenter and his wife Amy Frances. As well as diary entries documenting their day to day activities, there are photos, pressed flowers, press cuttings, concert programmes and their wedding invitation. The diary gives a good insight into the life of a scientist working in Africa and the experiences he and his wife had while travelling to different regions, attending events such as dances and cricket matches with the colonial community at Entebbe and the various illnesses they contracted while abroad. Their entries for Christmas suggest a relaxing break and provide a little insight into the Carpenter’s relationship. 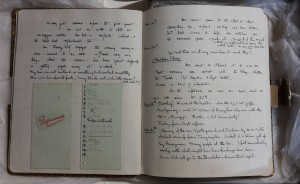 Geoffrey: Our dance at the club.

We had a busy day preparing – P (Geoffrey’s name for his wife) with help from Mrs Neill, Mrs Lyall, Mrs Griffin and the hospital cook did the food. Mrs Duke and Miss Richardson (I won’t call her Hope) and Mrs Neill helped decorate and arrange room while I did the greenery and garlands which P got at Kampala. I got lamps from C and made a bandstand on the grass below the balcony for the K.A.R.

Amy: In the evening, we arranged the supper, dealt out the crackers. Geoff and I had a hurried dinner and went down to the club, I was later than G and only just arrived before the first guests!

We had an extra to start, but no supper extras. We had a definite interval and the band had refreshments too.

We thoroughly enjoyed the evening and everyone else seemed to as well, and they said very nice things about the dance – we had great difficulty in getting people away at 10 o’clock.

Geoffrey: My love was not overtired as everything had worked smoothly. She wore her apricot frock, I my black coat with silk revers! (moth eaten!!!!) 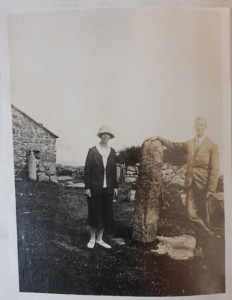 Amy: We went down to the club to clear everything up, and found nothing had been broken. Mrs Neil came to help. We returned all the borrowed spoons and forks etc.

Geoffrey (the point of this remark is that we might not have done this until later! As any ass would know)

Amy: Yes but there are not any asses here to read this!

Geoffrey: We went to Church at 8 and 10.30. That evening we dined with the Grays, Whittles, Mr Turton, Mr Hayden and Capt. Walters. I won a box of chocolates.

In the afternoon we read our mail, which we had had since the 23rd.

Amy: Dined at the Neill’s, also the C.J’s, Mrs Griffin, Montgomery’s and Dr Aders of Zanzibar who was with the M’s, Braggs. Rather a hot dinner party! Turkey from East Africa.

Merry Christmas to all from the Archives Team!