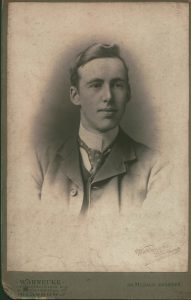 When considering the foundation of the School we often refer to esteemed staff such as Sir Patrick Manson, but often overlooked are the dedicated and accomplished members of staff like helminthologist Professor Robert Leiper who helped establish the School in its early days.

Leiper joined the School in 1905 while it was still based at the London Docks and prior to its emergence as the London School of Hygiene & Tropical Medicine in 1924. Here, Leiper became the first professor of helminthology at the University of London, supposedly, personally chosen by Sir Patrick Manson. During his time at the School, Leiper went on numerous research trips abroad, investigating the guinea-worm in the Gold Coast, and worked under the guidance of German zoologist and helminthologist Arthur Looss at the University of Cairo. In addition to his research, Leiper founded the Journal of Helminthology and the Helminthological Abstracts, and was Director of the Prosectorium of the London Zoological Gardens

Leiper’s passion extended beyond helminthology, proving himself to be a guiding force in matters of the School helping to decide policies and manage its affairs; Sir Philip Manson-Bahr stated that it was probably his guidance that the London School of Hygiene merged with the Tropical School after the Athlone Report in 1924. Moreover, Leiper led the School on several occasions, stepping in as acting Dean of LSHTM. 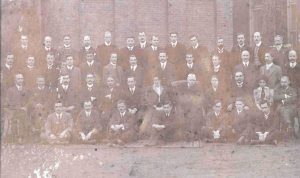 Leiper in the front row, third from the right, near to Sir Patrick Manson

Robert Leiper is probably best known at the School for the Institute of Parasitology that was based at Winches Farm in St Albans that he both set-up and directed. During its 68 year history the Institute conducted important research work into schistosomiasis, onchocerciasis, malaria, trypanosomiasis and leishmaniasis. Although the site was closed down in 1992, its work carried on at Keppel Street.

Although not directly involved in its creation, his dedication and guidance helped to establish the School in the early days and his mark was left long after his retirement in 1947.

Leiper’s papers relate to his work, life and research. Please contact the Archives team if you wish to view the collection.