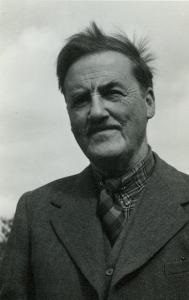 Above the entrance to the Library & Archives Service, on the first floor of the Keppel Street building, is a frieze designed by the sculptor Eric Henri Kennington RA (1888-1960). He was an English sculptor, artist and illustrator, and an official war artist in both World Wars.

As a war artist, Kennington specialised in depictions of the daily hardships endured by soldiers and airmen. In the inter-war years he worked mostly on portraits and a number of book illustrations. The most notable of his book illustrations were for T E Lawrence’s Seven Pillars of Wisdom. He was also a gifted sculptor, he was best known for his 24th East Surrey Division War Memorial in Battersea Park, for his work on the Shakespeare Memorial Theatre in Stratford-upon-Avon and for the tomb effigy of Lawrence at Wareham in Dorset. 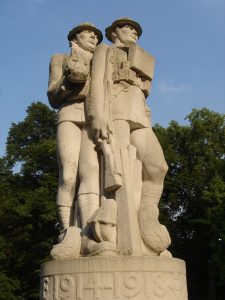 In the late 1920s, he designed the frieze for the School. The frieze is a large low-relief in plaster. The rectangular panel depicts a mother and child being protected from the attentions of a fanged serpent by a nude, bearded, knife-wielding father with a touch of Zeus about him. The panel was originally to have been placed above the main entrance of the School in Keppel Street. However, while the architects had no objection to Kennington’s nude male figure prominently displaying his genitals, the trustees were far less enthusiastic. When Kennington vigorously refused to modify the design by providing the male figure with an appropriate loin cloth, it was decided that the panel should be placed inside the building. The figures are set amidst reeds, palms and river fowl which are treated in such a way as to suggest Kennington’s continuing interest in ancient Egyptian art, such as murals on the walls of tombs. The serpent may have been influenced by Mayan carving of the serpent deity Quetzalcoatl, which was feathered and possessed teeth.

The panel was painted over to disguise the cracks and damage that appeared when the Library’s mezzanine floor was constructed in 1966.