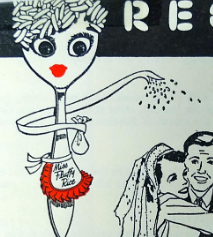 The Library’s Pamphlet Collection, housed in the gallery of the main Reading Room, comprises government reports, research papers, leaflets and circulars, and instructional manuals, to name but a few. A more surprising element of the collection is the twentieth-century pamphlets containing recipes. The shelf marks relating to Nutrition naturally furnish most of them, especially shelf marks BEXM, BEXN, BEXP and BEXY.

They include British logistical pamphlets from WWII and the 1950s on how to feed armed forces, run a meals-on-wheels service, or cook under emergency conditions.

There are also recipe and diet pamphlets from public information campaigns by governments and research bodies. These date from the 1930s to the 1980s and show what authorities in different countries wanted people to eat. Several also lay out optimal daily menus:

These were published a year apart in the UK and Hawaii. It seems like stew was an offering common to the two, though!

Some of the covers are really evocative of the period:

Aesthetic concerns aside, the content of each of these two books shows efforts by universities and colonial administrators to communicate their opinions on nutrition. For more on the South Pacific Health Service’s nutrition projects, see Sarah Hartley’s article on “Interweaving Ideas and Patchwork Programmes: Nutrition Projects in Colonial Fiji, 1945–60.”

Finally, we have several pamphlets circulated by various marketing bodies from the US and the UK related to specific foodstuffs. They feature some especially delightful illustrations and photographs:

The rice dishes above come courtesy of American Rice: My Home Cook Book. This and “Miss Fluffy Rice” (pictured below) were produced by the US Rice Export Development Association in the 1960s.

Rice is not the only foodstuff in the Pamphlet Collection, either. Both cheese and dry milk also get their time in the spotlight. The celery gratin pictured below was perhaps never going to be a looker, but the Cheese Bureau was undeterred. The Oxford English Dictionary credits the Cheese Bureau with coining the term “ploughman’s lunch” in the 1950s. Some schools of thought attribute it instead to a campaign by the Milk Marketing Board and the English Country Cheese Council in the 1960s (see the Encyclopedia Britannica).

Often collected by the Library not long after they were first published, these pamphlets and the recipes they contain now offer a fascinating – and sometimes bizarre – glimpse into how institutions across the world imagined an ideal diet.

The LSHTM Archives hold wartime leaflets from the Ministry of Food, including Christmas recipes. The Library catalogue is searchable for titles and authors of articles from several domestic science publications from the mid-19th to the mid-20th centuries. These include Good Housekeeping and Harper’s Bazaar, hosted by Cornell University Library. The full repository is accessible free here for those who prefer to browse.

If you’d like to take a look for yourself at some recipe pamphlets, below is a bibliography including direct links to the Library catalogue:

Cathcart, Ed. P. An Economical Budget for the Family with Menus and Recipes … London: University of London Press, n.d. BEXP.46 ?

Ridgway, U.A., and E.A. Webb. From the Farm and Garden to the Kitchen and Store Cupboard. Leicester: Leicestershire and Rutland Federation of Women’s Institutes, 1938. BEXN 1939

R.A.F. Manual of Cooking and Dietary: Promulgated for the Information and Guidance of All Concerned. S.l: s.n., n.d. BEXN (p.) 1942