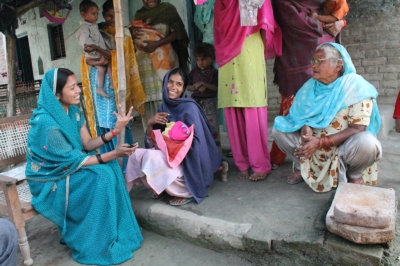 Reports (1) of changing trends in the use of particular systems of medicine, and policymaking to support or counter these trends, abound in the academic and lay literature. Most such reports suggest an increase or decrease in preference for a system of medicine, based on reported or documented use of particular healthcare facilities. But, does a visit to a particular healthcare facility or practitioner automatically indicate preference? Is picking a healthcare path entirely a matter of employing your own free will to make a selection from the plethora of options that healthcare systems (public, private, and the several shades in between) place before you? Do healthcare systems actually even place all the options before you? Are the choices you make truly of your own “free” will, not subject to external forces that determine awareness, influence leanings, and facilitate actions?

The gap between choice and action, specifically preference for a certain system of medicine and the use of that system, may be huge, and influenced by numerous social, economic, political and personal factors. The use of a system of medicine is not based solely on the effectiveness of particular therapies for particular disease conditions, but also on policy and political support for the education, accreditation, publicity, and infrastructure provided to practitioners and researchers in the system, public health system provision, as also social trends and cultural beliefs, as well as their interaction to result in the healthcare options available to people, and how they make their choices, or sometimes, who makes these decisions for them. Decline in use may potentially, but not necessarily, stem from decline in preference; and both may be responses to the socio-political environment. To assume that reduced use reflects reduced preference is to assume a world of limitless opportunity that facilities actions entirely on volition, influenced only by facts (which for their part, are fully and freely available) and not opinion and systems.

Much as we like to believe that the formulation of policy, and the practice of medicine in general, are evidence-based, and congratulate ourselves on being scientific and objective, it is almost always opinion rather than fact, or at least opinion of fact that stimulates, guides and perpetuates action. The quest for evidence, and the uncompromising rejection of concepts and practices that do not make the grade, may, ironically, not be as scientific as they may be skewed.

Once a field of knowledge gains ascendancy, it becomes the standard by which other fields are evaluated. This can be very problematic, particularly if the fundamental approaches of the fields (dominant and non-dominant) are divergent. This situation is very clear in the plurality of medical systems in the world today. The dominant stream of medicine is variously known as allopathy, biomedicine, Western medicine, or modern medicine, even ‘English medicine’ in regions once part of the British Empire (testimony to its introduction to the colonies). Systems of medicine other than the mainstream one are termed traditional (if embedded in the culture of the place), complementary (if used in addition to the mainstream system of medicine), and alternative (if used in place of the mainstream system of medicine). These systems are gathered into the acronym TCAM for traditional, complementary and alternative medicine. The dominance of a stream of medicine results in the governance and provision of the public health system being almost entirely along the lines of the dominant system of medicine, and in the other systems of medicine, even if  officially recognised, receiving a much smaller proportion of technical, infrastructural, logistical, administrative, and financial support, often only token. Further, the recognised non-mainstream systems of medicine are also assessed, accredited, and administered along the same lines as the mainstream, which may be quite inappropriate for them given the differences in their concepts and approaches from the mainstream system of medicine. Prolonged deficiency of the kind and volume of support needed for the sustenance and flourishing of non-mainstream systems of medicine can lead to their erosion, and eventually elimination from society, resulting in the loss of a chunk of knowledge and culture, besides a healthcare recourse for people.

The reduced use of TCAM reported by some researchers may easily be a reflection of the consistently low access that populations have had to reliable TCAM over the decades, including the lower levels of media promotion (cf. that for modern medicine), and the far lower policy support demonstrated in little, if any, insurance coverage for TCAM therapy, lower research output on TCAM, and non-recognition by governments of numerous systems of TCAM. In addition, the ageing/retirement and death of TCAM practitioners, particularly traditional healers, in the absence of interested and competent others to replace them leads to a paucity of healers for the population to access even if they desire to do so. Some of the reduced use of TCAM may also be attributable to social desirability, as over the decades, progressively more Westernised education and lifestyles, including the use of modern medicine, are recognised and sought as markers of development.

The paths from information to preference, and then from preference to use, are complex, and call for nuanced research, careful reporting, and sensitive policymaking to truly offer a fair and comprehensive set of healthcare options to people.