What a lack of breastfeeding support is costing the world

Every year, a lack of concerted support for breastfeeding from governments around the world costs the global economy more than US$570 billion. These losses, the cumulative result of child and maternal mortality, increased healthcare costs, and depleted human capital potential, are preventable through proactive efforts to support, protect and promote breastfeeding.

Breastfeeding saves lives and safeguards development. It serves as a child’s first immunization, provides protection against common childhood illnesses like diarrhoea and pneumonia, improves cognitive development, and is associated with a reduced prevalence of obesity and diabetes later in life. Breastfeeding also offers protective benefits for mothers, helping to prevent breast and ovarian cancers, as well as type 2 diabetes.

These benefits all translate into economic gains – and not breastfeeding results in immediate and future costs, from the family level to the national level. Not breastfeeding drives up healthcare costs when it becomes necessary to treat illnesses that could have been prevented. Household expenditures increase as families must purchase breastmilk substitutes for their children, which are often expensive. And children’s future productivity is curbed, leading to lower future earnings, and lost economic contributions.

Calculating the cost of not breastfeeding

The Cost of Not Breastfeeding Tool is an evidence-based modelling tool that uses open-access data to estimate the health and economic costs of not protecting, promoting and supporting breastfeeding. First launched in 2019, the tool was the first of its kind and used by organizations around the world to inform new guidelines and make recommendations to increase breastfeeding rates globally. The methods and results of the analysis from the tool were published in the Health Policy and Planning journal which became the most cited paper of the year.

A new and updated version of the tool, available on both the Nutrition International and Alive & Thrive websites, contains updated datasets, new indicators, a new function to calculate results for different scenarios or targets, and online access to the results for more than 180 countries. Using this tool, we can calculate exactly how much a country’s lack of support, promotion and protection of breastfeeding is costing – not just in healthcare spending, but in mortality, IQ points and future human capital.

For example, using the tool, we can determine that breastfeeding according to the WHO’s recommendation can prevent more than 500,000 deaths of children and mothers and nearly 4.6 million cases of childhood obesity globally each year – and save $23.8 billion in healthcare costs. Breastfeeding can also prevent the loss of 200 million IQ points and 70.5 million years of education. 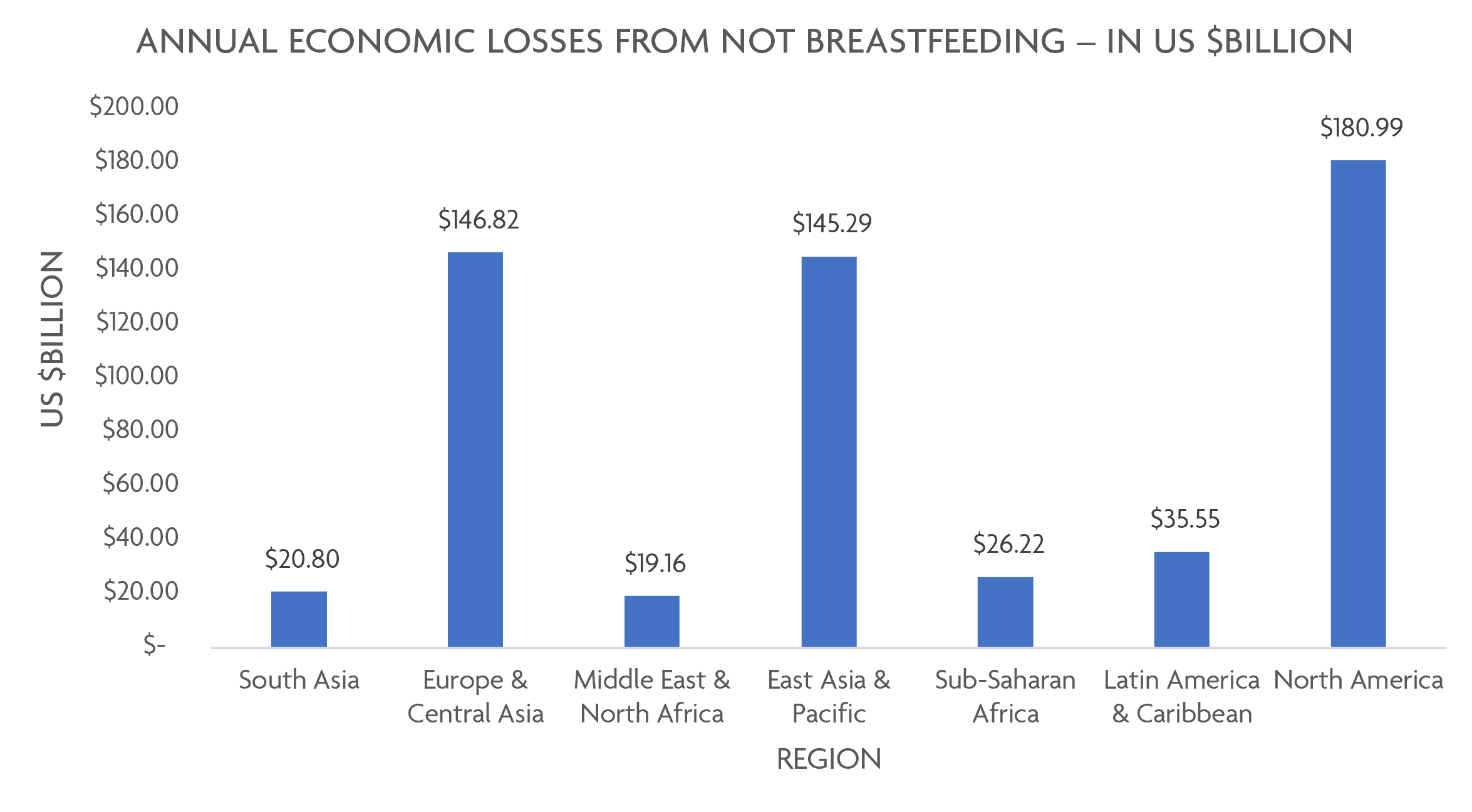 These results speak not just to a child’s potential future earnings and economic contributions, but also to their quality of life and ability to achieve their full potential.

Government protection and promotion of breastfeeding is critical

Our goal with this tool is to make this information as accessible and user-friendly as possible, so that policymakers and advocates can determine the economic, health and human capital impacts of investing in policies to support and promote breastfeeding. The evidence generated with the tool will be integral to raising awareness with governments, industry and donors about the urgent need to scale up breastfeeding.

The first version of the Cost of Not Breastfeeding Tool was used by the Global Breastfeeding Collective in the development of the investment case for breastfeeding, in support of their seven recommended policy actions, which lay out the concrete steps that governments can take to increase the global rate of early, exclusive and continued breastfeeding.

Government investment is fundamental to supporting women and families and driving necessary action to scale up breastfeeding globally – to save lives, protect growth, development and economic health, and provide a better future for their countries.

The Cost of Not Breastfeeding Tool provides the evidence needed to generate that action.

The Cost of Not Breastfeeding Tool was first developed between 2017 and 2019 by Dr. Dylan Walters and Alive & Thrive, with funding from the Bill & Melinda Gates Foundation. In 2022, Nutrition International updated and developed the second version of the tool (led by Sameen Ahsan, Sakshi Jain and Dylan Walters) in partnership with Alive & Thrive and Limestone Analytics, with funding from the Government of Canada.