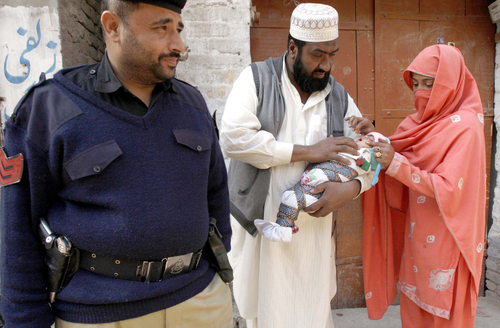 Door-to-door vaccinators: risking their lives to help stop the spread of polio in Pakistan

In the last two years, more than 60 people have been murdered delivering polio vaccine door-to-door to children in Pakistan. These workers are part of a global effort to eradicate polio; they’re working to create a firewall of vaccinated children that would stop poliovirus forever. But tragically, they’re being targeted with lethal violence, gunned down as they deliver vaccine to kids.

Anti-government militant groups have claimed responsibility for these attacks. These groups are not anti-vaccination per se: some support door-to-door polio vaccination when it suits their political interests. But because polio vaccination is pushed and supported by outside interests, and because it’s one of the most visible activities of an underfunded government health system, it has become an attractive target for anti-government militants. The CIA’s use of fake vaccination campaigns to collect information also contributes to distrust in these workers.

Despite the fact that frontline workers are being murdered in the course of their jobs, though, neither the Pakistani government nor the international organizations that support polio eradication have been willing to pay them a living wage for their work. Frontline polio workers make just a few dollars a day, less than unskilled laborers in many parts of Pakistan.

I’ve interviewed about 100 of these workers, most of them women, over the past 10 years. Most of them take up polio work because they have no choice: their husbands and fathers—the usual sources of support for women in Pakistan—are dead or unable to support their families. Few jobs for women are available in Pakistan, but the polio eradication effort values female workers for their ability to go inside houses where men can’t.

“I get paid for my blood and my sweat, but there’s relief in the work too,” one woman told me, explaining that she was able to use the small amount of money she made to support herself and her young son. But nearly every single worker I’ve talked to notes that the pay is not enough to live on. Some women talked about working in temperatures of over 40 degrees Celsius and denying themselves bottled water because it would cut into the small amount of money they take home.

In the wake of the killings in Pakistan, cases of polio have increased. Pakistan is now the world’s most significant reservoir of poliovirus. Supporting frontline vaccination staff in their important work should be a priority not just for Pakistan but for those across the world who want to stop the global spread of polio.

Sufficient support for frontline health staff should always be a priority. But in dangerous situations—like the ones faced by the Pakistani polio workers, and Ebola workers in West Africa—living wages and strong benefits packages take on even greater importance. When health staff are asked to risk their lives to protect the lives of others, they certainly deserve job security, and enough take-home pay to feed their children.

In Pakistan, polio workers have been taking to the streets to demand better working conditions. Helping to meet their reasonable demands—which include better, timely wages; job security; and physical security as they work—should be a priority. For years, planners have provided these women with the smallest amount possible. It’s time for generous wages and benefits to attract, motivate, and retain the best people for this very dangerous and very important work.