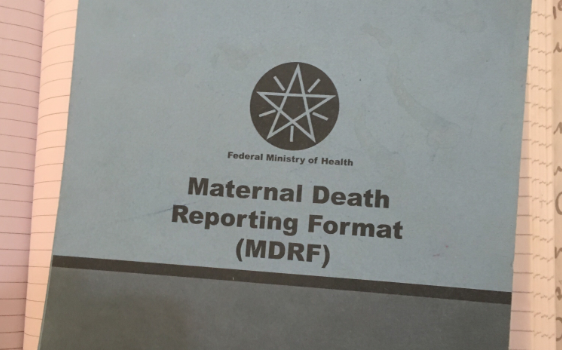 Maternal death reporting is all about politics

How can a health system respond to maternal deaths? The concept is simple and appealing: identify all maternal deaths, understand why they happened and implement interventions to prevent similar deaths from occurring in the future. However, the implementation of Maternal Death Surveillance and Response (MDSR) systems have proved difficult in many countries where maternal deaths remain unacceptably common. This is also the case in Ethiopia, where health workers only report about 10% of the expected number of maternal deaths. What are the barriers to identify and learn from the 90% of maternal deaths that seem not to be counted?

Maternal mortality has become a key indicator of development and health system functioning –at the global, national and health facility level. While maternal mortality is popularly communicated as a neutral metric, the numbers are inherently politicized, and at best, estimates with a great deal of uncertainties surrounding them. In our recent study, we have investigated practices and reasoning involved in maternal death reporting and review practices in Ethiopia, where the political nature of maternal deaths significantly impacts the knowledge the health system is able to produce – and act upon.

The politics of data production

The Ethiopian health system is renowned for its remarkable expansion of programmes and interventions the past decades. Massively improved health outcomes have been produced by a regime that by most scholars is characterised as authoritarian. Maternal mortality reduction is a top priority for the government, and is monitored by officials both in- and outside the health system. In our study, we discovered how well-known challenges to death reporting and reviewing, such as fear of revealing malpractice, were exacerbated by fear of sanctions among health workers.

Health workers perceived reporting and reviewing of maternal deaths as a politically undesirable disclosure of malfunctions at different levels of the health system. Furthermore, it was seen as risky for the health workers involved. Being held personally accountable for the deaths in the legal system or by next of kin, or being denied a future training or promotion by superiors were seen as potential consequences. For many, this dilemma resulted in not reporting maternal deaths, or blaming the deaths on factors beyond their control, on the deceased women, their families or lower-level health facilities. As a health bureaucrat expressed:

Maternal deaths always become 0 even if we expect deaths”.

When we discuss our study findings with study participants, researchers and policymakers, they seem to take under- and misreporting of maternal deaths as a taken-for-granted fact. Our study shows how, paradoxically, the priority given to the achievement of maternal mortality reduction may become a barrier to effective on-the-ground implementation of MDSR. Furthermore, the ways in which health workers do (or do not) report and review maternal deaths perpetuate a certain way of seeing problems and solutions in maternal health, often pointing away from failures in health care provision. We argue that attention to the broader political context and measures for health worker protection are needed when creating an enabling environment for MDSR implementation – to be able to identify and learn from all maternal deaths.

« How can we do a better job of setting research agendas with communities?
Gender quotas: Foe or friend for health leadership? »