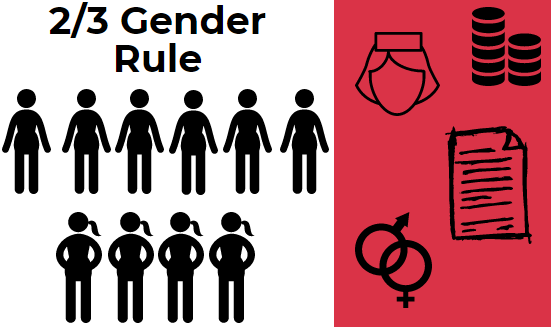 My colleagues and I recently published a paper discussing the experiences and career trajectories of male and female health managers at sub-national level in Kenya. The published data was collected through in-depth interviews with sub-county level managers. What was striking to me in conversations with these individuals was the influence of the so-called ‘2/3 gender rule’.

In 2010, Kenya, promulgated a new ‘gender-sensitive’ constitution that moved the country from a centralized to a devolved system of government with 47 semi-autonomous counties, and the decentralization of many functions to county level including health functions. The new constitution explicitly references gender representation in leadership spaces stating that “no more than two-thirds of the members of public elective or appointive bodies shall be of the same gender”, (i.e. the ‘2/3 gender rule’). Although the law does not make explicit reference to women, given the prevailing dearth of women in leadership positions both in the legislature and in the public service, it has in effect been interpreted to mean that there should be at least 1/3 female representation in the various government leadership bodies and agencies. This law applies to all sectors and directly impacts on all national ministries, counties and sub-counties. It has also been embedded in the human resource and diversity policies of the Public Service Commission, which in turn impacts on the public workforce including in the health sector.

The use of quotas is not unique to Kenya and is a common strategy that many governments and institutions put in place to increase the proportion of underrepresented groups – in this case women in leadership spaces. In addition to raising consciousness of female representation and engagement in leadership spaces, quota systems have been observed to have additional positive societal benefits including in low-and middle-income countries (Beaman 2007, Burnet 2011, Bauer & Burnet 2013, Bhalotra and Clots-Figures, 2014). Nonetheless, they can potentially deflect from more nuanced examination of gender barriers such as social and structural factors that impede equity, as the focus is primarily on gender parity in terms of numbers. In our work in Kenya for example, gender was not explicitly identified as having any influence on leadership experience or career progression with one respondent (drawing on the 2/3 gender rule) stating:

“[Gender] is not even a side issue. . .it’s a non-issue. Both our CECs [county executives for health] so far have been ladies. . .I do not think it’s an issue for our department. If you look for example at the balance of our [management] team, we have about 5-6 females from a team of about 17.”

However, closer examination of responses in the Kenya data revealed that gendered factors played an important role. Most fundamentally, women’s role as child bearers and gendered societal expectations including child nurturing and other domestic responsibilities can influence their ability to take up leadership positions and their selection and appointment as leaders. Concerns around maintaining a work–life balance were primarily raised by female respondents, with many stating that they sometimes struggled to juggle between full-time work and domestic responsibilities. These gendered influences were then seen to intersect in relatively invisible ways with other factors more readily identified by respondents to influence their progression and experience. The most dominant of these factors was professional cadre, with medical doctors more likely to be selected into leadership roles, and whose career progression was well-defined and distinct from other health cadres. Preferential selection of medical doctors could also result in unintended gender inequity in health leadership, given that the medical profession in Kenya was historically a male-dominated field, with women mostly being in health professions such as nursing. Although there has been a gradual shift with equal numbers of men and women now getting into medical school in Kenya, it is less clear whether this has translated to better gender-balance in higher level categories and decision-making spaces.

This illustrates that gender quotas can be a double-edged sword. Whilst they play an important role and should be cautiously encouraged; their focus on numbers have the potential of crowding out recognition of, and discussion around, other important barriers that hinder gender equity. As such, implementation of quotas should be done in tandem with other strategies that enable women to take up leadership positions whilst still managing ‘domestic obligations’. These strategies can include family friendly policies that for example institutionalize: adequate maternity and paternity leave; flexible working hours and breastfeeding-friendly spaces that enable a smooth transition back to work post-maternity leave; requirements for on-site or subsidized child daycare; allowing work away from the worksite e.g. working from home and so on. More importantly, in contexts such as Kenya where there is still a prevailing belief that “a woman makes the home”, resulting in the disproportionate over-burdening of women with childcare and domestic responsibilities; we need to start engaging in conversations that challenge these gendered norms with the hope of more transformative changes. As one my favourite authors Chimamanda Adichie Ngozi aptly put it: “Policy is important, laws are important, but changing cultural norms and mindsets matters even more…” I personally look forward to a day in Kenya when both men and women will make the home!