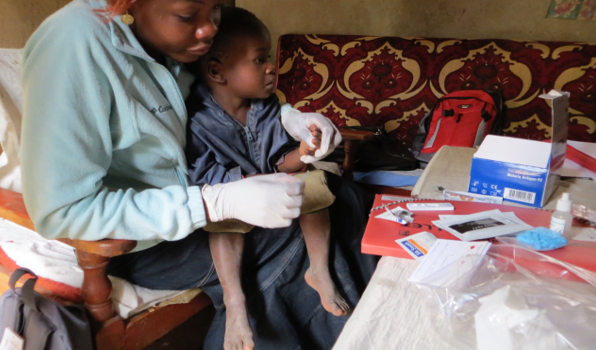 Do population beliefs change if we improve appropriate use of malaria medications?

In malaria-endemic countries non-malaria febrile illnesses are frequent. Malaria diagnostic testing is becoming increasingly common. However, especially in rural settings, febrile individuals are often treated at retail drug stores, and among those less than 10% get a malaria test. As a result, the majority of malaria cases are still not appropriately treated, with problems of both underuse and overuse. On the one hand, some patients who have malaria do not take the most effective class of anti-malaria drugs – artemisinin-based combination therapies (ACTs) – underuse. On the other hand, many patients who do not have malaria consume ACTs, especially when they are heavily subsidized – overuse. This dual problem in malaria treatment remains a major challenge in several African countries and contributes to the global burden of the disease, by depleting scarce public resources used for subsidies, by potentially increasing the risk of pathogen resistance, and by not treating the root cause of the febrile illness.

There is evidence that population interventions, such as providing free rapid diagnostic testing (RDT) through community health workers (CHWs), and ACTs subsidies (conditional on a positive test), are effective in increasing testing take-up and adherence to the test result. This leads to higher proportions of test-positive individuals taking ACTs, and test-negative individuals not taking it. As more individuals gained experience with RDT and ACTs and learned about them, their beliefs about the RDT result being correct and ACTs being effective might change. The complex intervention implemented in rural Kenya changed individuals’ behavior. Did population beliefs also change as individuals became more familiar with these technologies? This is what our findings, published in Health Policy and Planning, suggest. We find that encouraging people to use new technologies – RDT- and guiding appropriate treatment behavior by subsidizing ACTs only for malaria-positive individuals – increases the belief that the technology (RDT) is correct, and that the drug (ACT) is effective. More importantly, as several testing and treatment behaviors were affected by the intervention, we also explore which played a major role in changing population beliefs. We find evidence that awareness and experience with RDTs, and experience with CHWs, are key mechanisms through which the intervention affects beliefs about malaria testing. We also find that appropriate use of ACTs and taking the correct dose are potential ways in which the intervention changed beliefs about the effectiveness of ACTs.

Beliefs are important determinants of economic behavior and might guide individuals’ future decisions. Thus, understanding how they change after a health intervention has important implications for long-term changes in population behavior. Our results highlight the importance of the malleability of beliefs and how interventions that aim to change behaviors can also influence population beliefs. Furthermore, the findings on mechanisms speak to which factors (in our case the knowledge and experience with testing and treatment technologies) matter most in changing beliefs, when several things change due to a complex intervention. Our findings are particularly relevant in countries across sub-Saharan Africa where individuals seek care for illnesses outside the formal sector. Their learning about new technologies, sustained by their evolution of beliefs, might guide individuals’ future decisions about malaria testing and treatment. Returns to these health technologies would then be amplified. We hope to see more work on how long-term behavior for subsequent testing and treatment choices, might change as result of changes in population beliefs.